Items related to A Short History of Western Legal Theory 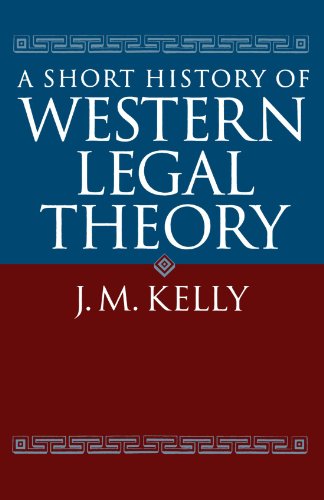 This unique publication outlines the development of legal theory from pre-Roman times through the twentieth century. It relates the evolution of legal theory to parallel developments in political theory and history. This work also discusses the relevant contemporary events in politics, economics, and religion. Each chapter begins with a synopsis of related historical background for the period, going on to discuss how these events are related to political and legal theory as well as how they become an influence on one another. Avoiding the conventional approach of "traditions" or "schools" of thought, this work aims to anchor legal theory to contemporary general history.

John M. Kelly, who died in January 1991, was a Fellow of Trinity College Oxford (1961-65) and Professor of Roman Law and Jurisprudence at University College Dublin (1965-91). He became a Senator in 1969 and served as a Deputy from 1973 to 89. He held several posts in the Irish government, including that of Attorney-General.

"Kelly brings to these subjects not only a wide and deep scholarship but also the breadth of an extraordinary political and literary career....Especially valuable is his discussion of the jurisprudence of ancient Greece and Rome....Kelly's discussion of contemporary jurisprudential debates is also noteworthy. He gives a brilliant analysis of H.L.A. Hart's critique of previous versions of legal positivism and of the critical responses which Hart's work has provoked from Ronald Dworkin and others."--American Journal of Legal History

"A triumphant final work, one that fairly illustrates the breadth of Kelly's learning and the sharpness of his wit. This is a history of Western legal theory meant for the student and teacher alike, and its crispness of style and clarity of thought make it uniquely suitable for both audiences....This is a magisterial book, full of wisdom and compassion."--Choice
"Masterful in brevity but comprehensive in breadth....Kelly's style and easy wisdom--drawn from history and literature, philosophy, the classics, the law, and buttressed by a facility with diverse modern and ancient languages--effectively disarm a skeptical reviewer. That this is the work of a wise and thoughtful person is evident from the earliest pages."--Law and History Review, Vol. 12, No. 1, Spring 1994

Book Description Oxford University Press, United Kingdom, 1992. Paperback. Condition: New. Language: English. Brand new Book. This unique publication outlines the development of legal theory from pre-Roman times to the twentieth century. It aims to relate the evolution of legal theory to parallel developments in political history, and accordingly offers the reader an account of relevant contemporaneous political, religious, and economic events. Each chapter commences with a general historical background for the relevant period, and discusses how political events and political and legaltheory are both related to one another and occasionally influence one another.No other English publication aims to anchor legal theory to contemporary general history in this way, shunning the more conventional approach to legal theory via the study of 'traditions' or 'schools', and it is hoped that this study will provide a much-needed basic text for students of jurisprudence, legal theory and politics. Seller Inventory # AAZ9780198762430