Items related to Religion In The Modern World: From Cathedrals to Cults

Bruce, Steve Religion In The Modern World: From Cathedrals to Cults

Religion In The Modern World: From Cathedrals to Cults 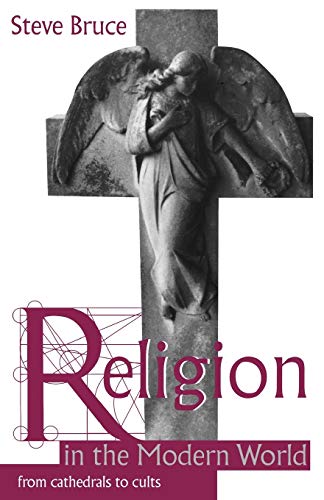 Religion, throughout history, has held a prominent yet curious place in western civilization. Though in constant flux, the institution of religion has consistently offered its followers solace in times of trouble, hope amid eminent failure, or, more generally, a sense of place and self in a large and seemingly indifferent world. It is the manner in which people have pursued their spirituality, however, that poses challenging questions of what religion means and where religion is heading in the twenty-first century. Offering an engaging look at the evolution of western religion from the early sixteenth century through the contemporary "New Age" cult, Steve Bruce argues that modernization, and the rise of individualism, have fundamentally altered the place and relevance of religious beliefs, practices, and organizations for both groups and individuals in Western society.
The people of the Middle Ages did what the Church told them God required. A small number of highly trained officials, acting on behalf of the state and the people, glorified God. They did so with a liturgy and with music that was far too complex for the active participation of lay people. Services were conducted not in the local language but in Latin, with ordinary people simply expected to behave morally, to attend church on the great feast days, and to finance the professionals who did the serious religious work. As Bruce shows, religion of this time was very straightforward: "Do God's will, or you'll go to Hell." It was a time when religion and superstition went hand in hand, as priests prayed for the salvation of the general public and saints offered powerful remedies for ailments. St. Wilgerfort, for example, could help wives be rid of their husbands, while other saints could protect men and cattle and visit plague on one's enemies.
It was not until the Reformation and the innovations of Martin Luther and John Calvin, Bruce points out, that religion was given back to the people. This period was marked by a focus on the individual, as local languages replaced Latin, hymns were sung to simple folk melodies, and a personal response to God was encouraged. More importantly, believing the right things took priority over performing the correct ritual. With this change came competing convictions and a newfound responsibility for one's own salvation, as well as a greater interest in finding a sect that most closely resembled one's particular lifestyle. Individualism now took on a new meaning: the right to do what we wanted provided it did not harm others. This consumer oriented mentality, coupled with the desire to avoid the church's less forgiving denominations, brought about a flowering of new religions and "New Age" innovations, from white witchcraft and goddess worship to doomsday cults. It is the cult, Bruce argues, with its emphasis on the freedom to do whatever one thinks is right, that will define religion in the twenty-first century.
Lively and accessible, Religion in the Modern World provides a comprehensive description of the changes in Western religion over the last 450 years, and an intriguing view of the direction religion is heading in the future. It is an invaluable resource for anyone with an interest in looking behind the headlines for the place of religion in today's society.

Steve Bruce is Professor of Sociology at the University of Aberdeen. He is the author of many books, including Religion in Modern Britain, The Rise and Fall of the New Christian Right, The Red Hand, and The Edge of the Union, and the co-editor of The Rapture of Politics: The Christian Right as the United States Approaches the Year 2000.

`I will certainly be requiring my students to read this book. It is an important corrective to too much soft analysis which views every slight up-turn as a sign of religious revival.'
Church Times

`Steve Bruce, a sociologist with no religious affiliation of his own, has some interesting points to make in his latest book, Religion in the Modern World.'
Church of England Newspaper

`Steve Bruce has written a lucid, concise and well informed ... volume ... It is good to find such a robust, well written and compact defence of the secularization thesis ... The author's command of his topic is impressive ... it is good to see such a well written study.'
Contemporary Review

`This book belongs to a series committed to providing authoritative introductions to aspects of the social structure of Britain ... written for a generation of students who may be as unfamiliar with the nature of religious differences in Britain as with the tools of sociological enquiry. For
the uninitiated it provides a good and reliable introduction.'
Church of England Newspaper

`Bruce is always fair to those who present another perspective on contemporary religion. He is just as lucid in dealing with the new religions and the "New Age" ... as in his analysis of the mainstream Churches ... his book is ... something of a tour de force, in which there is scarcely a page
which lacks one or another arresting and challenging ideas.'
Bryan Wilson, The Tablet

Bruce sets out with admirable clarity both the evidence for and arguments in favour of the secularization thesis ... Bruce's book should be read by all those who want to faimiliarize themselves with this thesis-it's origins developments and conclusions; for a clearer and better written account
would be difficult to find. s

`a subtle but swift-moving argument which draws illustrative material from widely diverse contexts ... Although contentious, Bruce is always fair to those who present another perspective on contemporary religion. He is just as lucid in dealing with the new religions and the "New Age" ... as in
his analysis of the mainstream Churches ... something of a tour de force, in which there is scarcely a page which lacks one or another arresting and challenging idea.'
John Rowe Townsend, The Tablet

enormous scope, ambition, verve and confidence. Religion in the Modern World draws upon an impressive range of statistical evidence to support its account of the dramatic decline of religion in recent times. Bruce's grand narrative of secularisation is ambitious, well told, involving, and
internally coherent...an excellent textbook for students - far better at stimulating their critical faculties than something more "balanced" and "objective". It will be a valuable exercise to get students to read this powerful restatement of the secularisation thesis alongside the qually strong
claims currently being made for "desecularisation" by soliologists like Berger. - Lind Woodhead. Relion. January 1998.

1. Religion In The Modern World From Cathedrals to Cults

2. Religion In The Modern World: From Cathedrals to Cults

3. Religion in the Modern World From Cathedrals to Cults

4. Religion in the Modern World: From Cathedrals to Cults (Paperback)

Book Description Oxford University Press, United Kingdom, 1996. Paperback. Condition: New. Language: English. Brand new Book. The people of the Middle Ages did what the Church told them God required. The sovereign consumers of the modern world `pick and mix' their own religions, Starting with the Reformation and ending with New Age spirituality, this book offers a comprehensive sociological description and explanation of the changes in the religious life of Western society that have accompanied modernization.This major new book from a leading sociologist of religion tracks the Church's changing role from monolith to Sect, to Denomination, and at the end of the twentieth century, to the Cult. What were the forces that brought about this change? What is the real role for the Church in the modern world? Professor Steve Bruce answers these questions in a clearly argued and accessible way. Including substantial chapters on religion in the USA, religion and ethnicity, and the New Age, Religion in theModern World is an invaluable resource for students of sociology, religion or history and anyone with a real interest in looking behind the headlines for the place of religion in today's society. Seller Inventory # AAV9780198781516

5. Religion in the Modern World

6. Religion in the Modern World: From Cathedrals to Cults

7. Religion in the Modern World: From Cathedrals to Cults [Paperback] Bruce, Steve

8. Religion In The Modern World: From Cathedrals to Cults

9. Religion in the Modern World: From Cathedrals to Cults

10. Religion in the Modern World