Items related to Would You Believe...Cobwebs Stop Bleeding?

Would You Believe...Cobwebs Stop Bleeding? 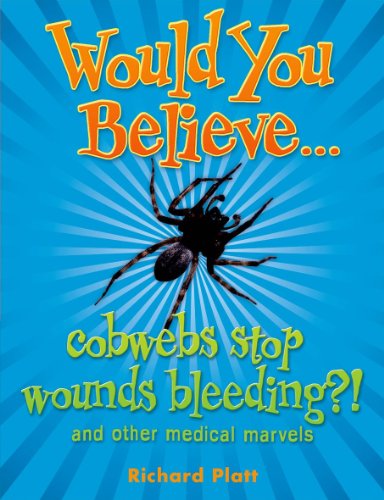 Young scientists get a real taste of the story behind the medicine as we examine the amazing practices used in medicine past and present. Readers will learn about the often painful and frequently distasteful medical practices that our ancestors employed such as using leeches, eating snail
shells or body snatching, as well as those that are still used around the world today - who needs an anaesthetic anyway?! Includes alternative therapies and major medical discoveries that changed the face of medical practice.

The 'Cross-Section' series on which Richard worked with illustrator Stephen Biesty sold more than two million copies. 'Pirate Diary' (Walker Books) awarded a silver in the Smarties prize last year, and its predecessor, 'Castle Diary' was shortlisted for the prestigious Kurt Maschler award,
for the TES award, and the History Today award. Richard has recently acted as consultant for Meridian TV on a series of six programmes about smuggling, appearing in several of them. He was also a consultant on the film 'Pirates of the Caribbean 2' starring Johnny Depp. He has written
general-interest articles on topics as diverse as management and witchcraft and contributed to books for a wide variety of publishers, including Cassells, Dorling Kindersley, Harper Collins, Haymarket, Octopus, Reader's Digest and others.