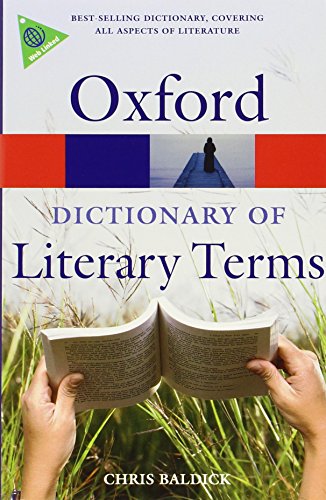 From Jacques Derridas différance to Henry Jamess ficelle, the vocabulary of literary theory and criticism can seem difficult if not opaque. To help remedy the average readers bafflement, this new Third Edition of Oxford Dictionary of Literary Terms provides succinct and often witty explanations of almost twelve hundred terms, covering everything from the ancient dithyramb to the contemporary dub poetry, from the popular bodice-ripper to the aristocratic masque, and from the social realism of Stalins era to the magic realism of Gabriel Garcia Marquez.

Shedding light on some of the most troublesome literary terms encountered by students and general readers, this gem of a book offers increased coverage of many new coinages from modern critical and theoretical movements. It also provides extensively updated coverage of traditional drama, rhetoric, literary history, and textual criticism. Throughout, the authors emphasis is on helping readers use these terms more confidently, whether in writing or in speaking (easy-to-use pronunciation guides clarify more than 200 potentially troublesome terms). Readers will find clear and often entertaining explanations for words such as multi-accentuality, postmodernism, hypertext, cyberpunk, and antanaclasis. In addition, the dictionary is thoroughly cross-referenced and now offers web links accessed via a regularly updated companion website.

A model reference book, Oxford Dictionary of Literary Terms will prove invaluable for both general readers and literature students at all levels.

Chris Baldick is Professor of English at Goldsmiths' College, University of London. He edited The Oxford Book of Gothic Tales (1992), and is the author of The Oxford English Literary History, Volume 10 (1910-1940): The Modern Movement (2004), In Frankenstein's Shadow (1987), Criticism and Literary Theory 1890 to the Present (1996), and other works of literary history. He has edited, with Rob Morrison, Tales of Terror from Blackwood's Magazine, and The Vampyre and Other Tales of the Macabre, and has written an introduction to Charles Maturin's Melmoth the Wanderer (all available in the Oxford World's Classics series).

`Review from previous edition This dictionary's virtues and its plain-spokenness make it ... as apt to the bedside table as to the desk: Dr Baldick is a Brewer for specialized tastes'
Times Literary Supplement