Items related to International Law and the Use of Force (Foundations... 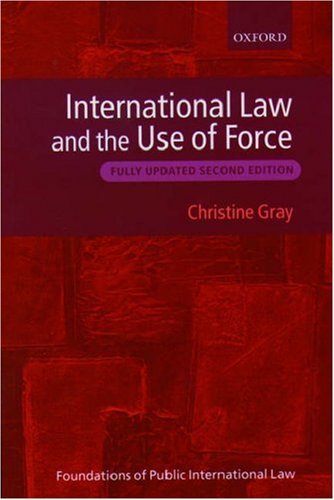 Since the publication of the first edition of International Law and the Use of Force, events have led to a major reappraisal of international law on the use of force. The terrorist attacks of September 11th and Operation Enduring Freedom in Afghanistan have raised fundamental questions about the right to use force in self-defense against terrorism, and the scope of the 'war on terror'. The question of whether there is now a new doctrine of pre-emptive self-defense has divided States. The invasion of Iraq in 2003 has prompted serious questions about the role of the United Nations and the legal basis of Operation Iraqi Freedom: had the UN Security Council authorized the use of force against Iraq? Was the US entitled to act without such authorization?

Christine Gray is Fellow of St John's College, and Reader in International Law at the University of Cambridge.

"The great strength of Gray's International Law and the Use of Force is its focus on state reaction to uses of armed force since the adoption of the UN Charter."--The American Journal of International Law

"This book provides students of international law and international relations with a highly accessible, thoroughly expert analysis of the rules governing when states may resort to military force. I would not want to teach without it."--Michael Byers, Professor of Law, Duke University

2. INTERNATIONAL LAW AND THE USE OF