Items related to Elections in the Americas: A Data Handbook: Volume...

Elections in the Americas: A Data Handbook: Volume 1: North America, Central America, and the Caribbean

Elections in the Americas: A Data Handbook: Volume 1: North America, Central America, and the Caribbean 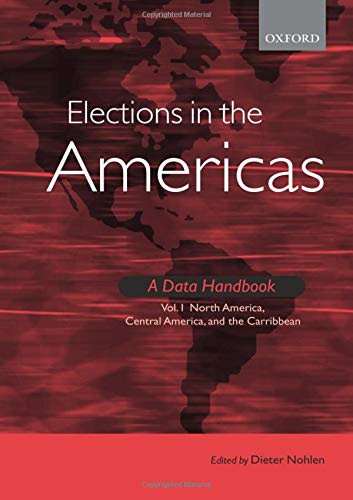 This volume continues the series of election data handbooks published by OUP. It presents the first ever compendium of electoral data for all 35 states in the Americas from their independence, or the introduction of universal male suffrage, to the present. Containing contributions from renowned scholars, Elections in the Americas is a highly authoritative resource for historical and cross-national comparisons of elections and electoral systems.

Dieter Nohlen is at Professor of Political Science, University of Heidelberg.

Dieter Nohlen and his team have once again exceeded all expectations. Elections in the Americas is the first comprehensive edition covering elections on the entire continent and will certainly remain a beacon for many years to come. * Sonia Picado, President, Interamerican Institute for Human Rights, Costa Rica * 'If, historically, academic studies have for the most part ignored elections in Latin America, the widespread advance of democracy during the last quarter of a century has put the electoral process at the center of analysis in the field of political science. The need for further empirical elaboration, with respect both to the results themselves as well as to the laws and norms governing elections, is an objective that this book successfully fulfils. At the same time, by presenting the data in a homogenous manner that facilitates comparative analysis, this book must be considered a fundamental work of reference. * Manuel Alcantara, University of Salamanca * Dieter Nohlen's German-language elections handbook for Latin America (1993) was a superb data source that I have been using steadily. The updated English version, also including North America, will be indispensable for all those who study elections, parties, and democratization comparatively. * Rein Taagepera, University of California, Irvine, and University of Tartu, Estonia *

1. ELECTIONS IN THE AMERICAS: A DAT