Items related to The Cantatas of J. S. Bach: With Their Librettos in...

Dürr, Alfred The Cantatas of J. S. Bach: With Their Librettos in German-English Parallel Text

The Cantatas of J. S. Bach: With Their Librettos in German-English Parallel Text 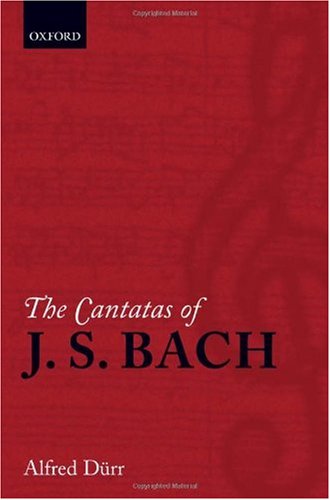 A work-by-work commentary on the Bach cantatas by one of the world's most famous Bach scholars, now available in English and in paperback for the first time. It includes all the cantata libretti in German-English parallel text. An indispensable reference book for anyone listening to, performing, or studying any of the Bach cantatas.

Alfred Dürr is one of the principal editors of the Neue Bach Ausgabe in which he edited "Bach's Well-Tempered Clavier." He holds honorary doctorates of music at Baldwin-Wallace College, Ohio and at Oxford University.

Richard Jones is a Bach scholar who has been a music editor, writer, and teacher since 1980. He studied at the University of Oxford and has taught at the universities of Cardiff and Sheffield. In 1997 he became the editor of the piano grade exam pieces for the Associated Board.

"D:u rr's text is intented for non-specialists and interested listeners, providing a well-informed and unpretentious description of each cantata. His focus is on the text and music, but his concise account of the occasions and recipients of these performances should stimulate thought about how Bach cultivated favour with local academics and with the Saxon electoral family."--Stephen Rose, Early Music

1. The Cantatas of J. S. Bach: With Their Librettos in German-English Parallel Text

4. The Cantatas of J. S. Bach: With Their Liberettos in German-english Parallel Text

Shipping: US$ 43.63
From United Kingdom to U.S.A.
Destination, rates & speeds