Items related to Operation and Modeling of the MOS Transistor: Special...

Operation and Modeling of the MOS Transistor: Special MOOC Edition (The Oxford Series in Electrical and Computer Engineering) 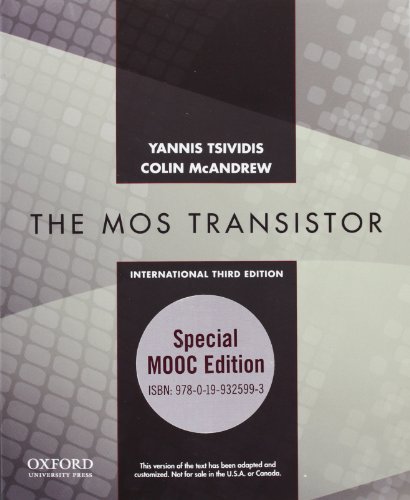 Operation and Modeling of the MOS Transistor has become a standard in academia and industry. Extensively revised and updated, the third edition of this highly acclaimed text provides a thorough treatment of the MOS transistor--the key element of modern microelectronic chips.

Yannis Tsividis is Charles Batchelor Professor of Electrical Engineering at Columbia University. His work with MOS transistors began in 1975 as part of his Ph.D. work at the University of California, Berkeley, in the context of the design and fabrication of the first fully-integrated MOS operational amplifier. He is a Fellow of IEEE. Among his awards are the 1984 IEEE W. R. G. Baker Prize for the best IEEE publication and the 2003 IEEE International Solid-State Circuits Conference Outstanding Paper Award.

Colin McAndrew became involved with modeling semiconductor devices in 1987 and has contributed to the development of models for MOS, bipolar, and passive devices. He developed the backward-propagation-of-variation (BPV) technique for statistical modeling and has been a primary advocate of the use of Verilog-A and compilers for device modeling. He has a Ph.D. from the University of Waterloo, works at Freescale Semiconductor, and is a Fellow of the IEEE.