Items related to Salafism in Yemen: Transnationalism and Religious Identity 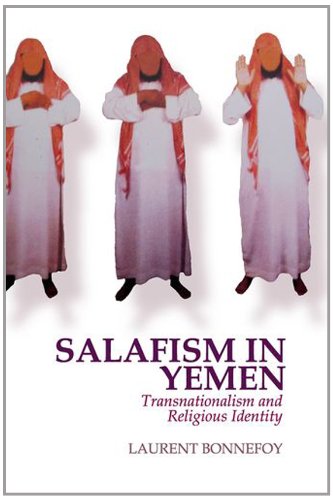 Over the last decade or so Salafism has become one of the West's new political bogey-men. Many regard the movement as the antechamber of violent groups such as al-Qaeda, and as the by-product of a centralized foreign-policy platform shaped by so-called Saudi interests. Based on extensive research conducted throughout Yemen between 2001 and 2009, and particularly in the southern province of Yafi', this book offers an original approach to Salafism and draws a necessary counter-narrative that takes into account the dynamics of the Salafi movement as well as its relationship to its evolving environment, either local, regional and international. Having studied over a hundred recorded sermons and conferences and dozens of books, and carried out interviews with numerous clerics, intellectuals and activists, Laurent Bonnefoy focuses on the allegedly apolitical Salafi doctrine promoted by the renowned Yemeni Salafi figure, Muqbil al-Wadi'i, who died in 2001. Building on IR theory and political sociology, he references the everyday practices of al-Wadi'i's dedicated followers, their rivalries as well as their own evolving trajectories. He demonstrates that, rather than resulting from specifically planned policies, Yemeni Salafism has, since the early 1980s, evolved through a series of spontaneous, grassroots mechanisms, many of which are shaped by transnational flows, that embed this movement in the complex Yemeni context.

Laurent Bonnefoy hold a PhD in International Relations from Sciences Po in Paris. He is a researcher in political science at the Institut Francais du Proche-Orient based in the Palestinian Territories. Building on four years spent in Yemen, his research focuses primarily on the development of the contemporary Salafi movement in the Arabian Peninsula. He has also researched and published on various issues linked to religious identities and politics in Yemen.

"Salafism in Yemen approaches its subject both through the writings of the movement's leaders and through the practice of its followers, offering a sensitive description of the movement s development and its place in Yemeni society. This book can be thoroughly recommended both for those seeking to understand modern Yemen and for those whose interest is in transnational religious movements, and Salafism in particular."--International Affairs

"Salafism is one of the most important and pervasive currents in the Muslim world and yet it remains among the least understood aspects of contemporary Islam. Laurent Bonnefoy's masterful Salafism in Yemen goes a long way towards remedying this problem. Refuting the common misunderstanding of Salafism as a Saudi export, Bonnefoy's work explores the complex interplay between local norms and transnational religious discourse."--Peter Mandaville, author of Global Political Islam and Associate Professor of Government & Islamic Studies, George Mason University
'Salafism in Yemen draws on impressive Arabic language skills and extensive fieldwork. In a subject area where difficulty of access and sheer divergence of worldviews can sometimes leave researchers seeming rather detached from their subject matter, it is encouraging to find Bonnefoy telling us early on that his understanding of Salafism in Yemen was informed not only by perusing magazines, pamphlets, recorded sermons and so on, but also by qat chews, outings and table tennis matches with Salafi aquaintances, as well as with the Salafs' opponents. This ethnographic component allows him to shift between macro- and microlevel analysis in ways that enrich his arguments enormously." -- Asian Studies Journal