Items related to Does Capitalism Have a Future?

Does Capitalism Have a Future? 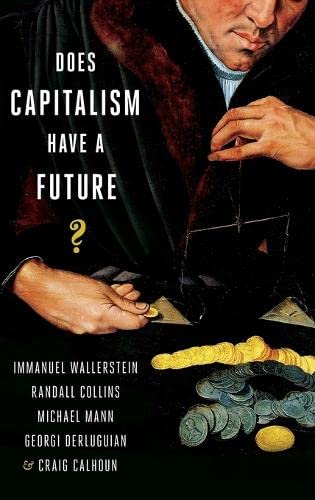 In Does Capitalism Have a Future?, a global quintet of distinguished scholars cut their way through to the question of whether our capitalist system can survive in the medium run. Despite the current gloom, conventional wisdom still assumes that there is no real alternative to capitalism. The authors argue that this generalization is a mistaken outgrowth of the optimistic nineteenth-century claim that human history ascends through stages to an enlightened equilibrium of liberal capitalism. All major historical systems have broken down in the end, and in the modern epoch several cataclysmic events-notably the French revolution, World War I, and the collapse of the Soviet bloc-came to pass when contemporary political elites failed to calculate the consequences of the processes they presumed to govern. At present, none of our governing elites and very few intellectuals can fathom a systemic collapse in the coming decades. While the book's contributors arrive at different conclusions, they are in constant dialogue with one another, and they construct a relatively seamless-if open-ended-whole.

Written by five of world's most respected scholars of global historical trends, this ambitious book asks the most important of questions: are we on the cusp of a radical world historical shift?

Immanuel Wallerstein is Senior Research Scholar at Yale and founder of the Fernand Braudel Center at Binghamton University.

Craig Calhoun is Director of the London School of Economics.

"Finally, a book that will make a difference! Five eminent scholars put together their collective wisdom and their many disagreements to open up a free-wheeling conversation on one of the most important questions of our time: the future of this economic system we call capitalism. This should be mandatory reading for every college student in the world, not because it furnishes the answers but because it opens up all the most important questions."--David Harvey

"Does Capitalism Have a Future is the work of five eminent big-picture thinkers. Their rich analysis of capitalism's contradictions and vision of possibilities for its future evolution are well worth pondering."--Francis Fukuyama

1. Does Capitalism Have a Future?

2. Does Capitalism Have a Future?

3. Does Capitalism Have a Future?

Shipping: US$ 43.62
From United Kingdom to U.S.A.
Destination, rates & speeds