Items related to The World Transformed: 1945 to the Present

H. Hunt, Michael The World Transformed: 1945 to the Present

The World Transformed: 1945 to the Present 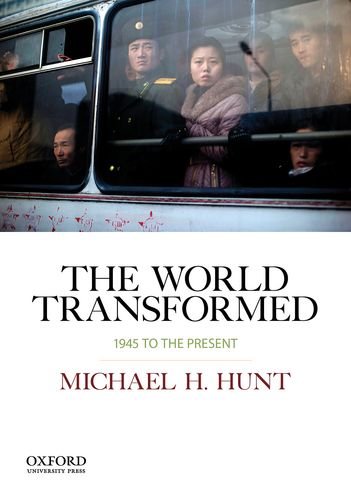 Through its lively and accessible narrative, The World Transformed provides students with an account of the political, socio-economic and cultural developments that have shaped global events since 1945. The book's focus on three central and profoundly interconnected stories--the unfolding of the Cold War, the growth of the international economy, and the developing world's quest for political and economic independence--offers students a framework for understanding the past and making sense of the present. Attentive to overarching themes, individual historical figures, and diverse nations, The World Transformed will find an enthusiastic reception in courses on post-1945 world history, international relations, or global topics.

Michael H. Hunt is the Everett H. Emerson Professor of History Emeritus at the University of North Carolina at Chapel Hill. He is the author of several books, including The World Transformed, 1945 to the Present: A Documentary Reader, Second Edition (OUP, 2014) and Ideology and U.S. Foreign Policy (2009). He is also the coauthor, with Steve Levine, of Arc of Empire: America's Wars in Asia from the Philippines to Vietnam (2012).

Shipping: US$ 14.97
From United Kingdom to U.S.A.
Destination, rates & speeds