Items related to Ethics and Epics: The Collected Essays of Bimal Krishna... 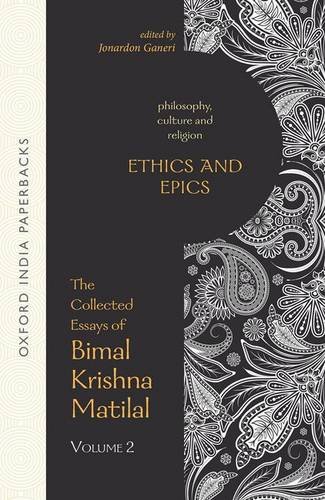 The unifying motif of Bimal Krishna Matilalas work is the study of rational traditions in Indian philosophical thought. With his ability to span the divide between the Indian and Western intellectual traditions, he brought contemporary techniques of analytical philosophy to bear upon the issues raised in classical Indian philosophy and, conversely, to highlight the relevance of Indian thought in the modern world.

From analyses of the arguments of the classical philosophers to an evaluation of the role of philosophy in classical Indian society, from critique of Western perceptions of Indian philosophy to reflection on the thought of Indian intellectuals like Bankimchandra and Radhakrishnan, the two volumes bring together rare and landmark essays. This volume includes sections on dharma, rationality and moral dilemmas; epics and ethics; pluralism, relativism, and interaction between cultures; ideas from the east; and concepts in Indian religions. The companion volume, Mind, Language and World, deals with scepticism and mysticism; Nyaya realism; Indian Buddhism; Sanskrit semantics; and philosophy in India: perceptions and problems.

Bimal Krishna Matilal (1935a91) was Spalding Professor of Eastern Religions and Ethics, All Souls College, Oxford.