Items related to Sextants at Greenwich: A Catalogue of the Mariner's... 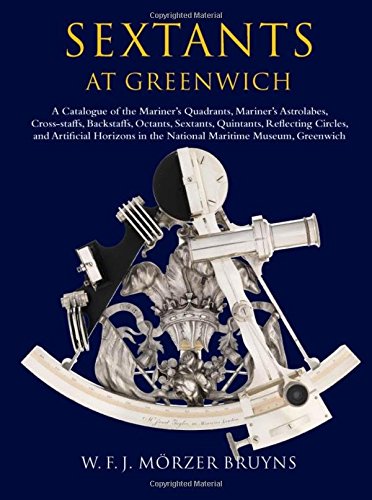 Sextants at Greenwich consists of two main sections: The introductory chapters and the catalogue of navigating instruments of the National Maritime Museum.

The first section gives a general overview of the history of celestial navigation with an emphasis on the instruments that were developed and used for that purpose, between about 1450 and the 1970s. The instruments in the catalogue form the main thread in these chapters.

The catalogue consists of 347 entries of instruments for celestial navigation, the octants, sextants and related instruments preserved in the National Maritime Museum. Each entry includes the place of the object's origin, its maker, the object's date, inscriptions (by the maker and/or relating to an owner), the graduated scale, the instrument's dimensions and a general description that includes details such as used materials and detached parts. Finally the object's provenance (previous owners and/or users) and references to literature on its history and handling are given.

Sackler Research Fellow in the History of Astronomy and Navigational Sciences
National Maritime Museum
Greenwich
Dr Willem F.J. Mörzer Bruyns (1943) was trained as navigation officer at the Amsterdam Nautical College and briefly sailed as a junior officer for the Amsterdam based 'Netherland' Line. He joined the Netherlands Maritime Museum in Amsterdam in 1969 and retired as Senior Curator of Navigation in 2005. In 1995 he was Huntington Fellow at The Mariners' Museum in Newport News, Virginia, and from 2005-2007 Sackler Research Fellow in the History of Astronomy and Navigational Sciences at the National Maritime Museum, Greenwich in London. Since 1972 Mörzer Bruyns has published several books and over ninety-five articles in scholarly journals, on the history of navigation and navigational instruments and on nineteenth-century Dutch Arctic exploration. He also wrote over fifty book reviews on these subjects in scholarly journals. In 2003 he obtained his Ph.D. at the University of Leiden, The Netherlands.

The quality is superb, the clarity of the illustrations is first class, and the text is thorough, informative and learned. The Observatory Magazine

Book Description Condition: New. Brand New Original US Edition.We Ship to PO BOX Address also. EXPEDITED shipping option also available for faster delivery.This item may ship fro the US or other locations in India depending on your location and availability. Seller Inventory # AUDECC-38468