Items related to A Philosophical Enquiry into the Origin of Our Ideas...

Burke, Edmund A Philosophical Enquiry into the Origin of Our Ideas of the Sublime and Beautiful (Oxford World's Classics) 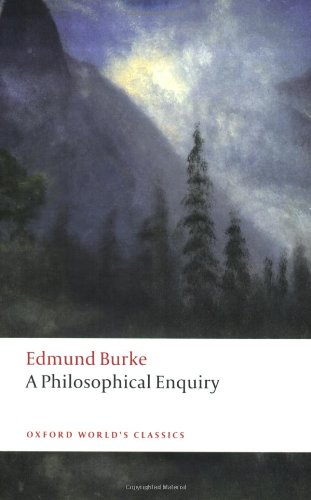 Adam Phillips has been working in traditional 2D animation for Disney since early 1993, with eight of those years spent in special effects. With all his free time, he writes and animates short stories for his personal website and online gallery, www.biteycastle.com.
Most recently, Adam convinced US band, Ween, to let him animate the video for their single "Transdermal Celebration." All involved were happy with the result, and an optimized QuickTime version of the video can be found on the book's CD.
Adam is quite small, but has big hands.

`It is concisely and efficiently annotated, and its vivid introduction brings out, among other things, the deep interrelations between Burke's views on art and his political outlook, even in this early work.'
Claude Rawson, London Review of Books

'must be one of the most useful additions to the Oxford World's Classics series for some time'
Robin Jarvis, Bristol Polytechnic

1. A Philosophical Enquiry into the Origin of Our Ideas of the Sublime and Beautiful (Oxford World's Classics)

2. A Philosophical Enquiry into the Origin of Our Ideas of the Sublime and Beautiful (Oxford World's Classics) Burke, Edmund and Phillips, Adam

3. A Philosophical Enquiry into the Origin of Our Ideas of the Sublime and Beautiful (Oxford World's Cl