Items related to Linking Citizens and Parties: How Electoral Systems... 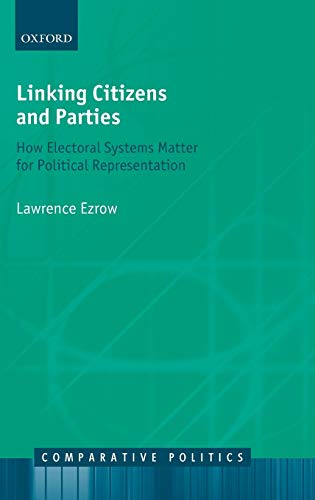 Linking Citizens and Parties addresses familiar questions about political representation: Are parties responsive to their core supporters or to the public in general? Do parties that adopt centrist policy positions benefit in elections? Does proportional representation encourage party extremism? These fundamental questions about democracy are paired with the empirical observation of Western European democracies during the last thirty years. The study highlights the pathways (mainstream and niche) through which citizens' political preferences are expressed by their political parties. It concludes with a positive evaluation of these democracies as their citizens have access to at least one, and possibly both niche and mainstream pathways.

We have long known that proportional representation schemes generate more political parties than do plurality systems. And we have long suspected that the character of representation in them is different as well. What is new in this provocative book is that Ezrow demonstrates that it is the type of parties, not the number, that matters for representation outcomes. Ezrow argues that niche parties, non-centrist groupings that stand for the views of small but coherent segments of the population, are uniquely the product of proportional systems and they are the reason that quirky minorities, from Communists on the left to nationalists on the right, find voice in proportional systems, but not in plurality systems. * James A. Stimson, Professor of Political Science, University of North Carolina, Chapel Hill * In political science, the nearest thing to general theorems are the famous Downsian median voter theorem and the "chaos" theorem of social choice. There is also the Duverger argument that proportional electoral systems give many parties, and "first past the post" give two, as in the US. We don't, as yet, know if these "theorems" really show us how politics works. Lawrence Ezrow's new book, Linking Citizens and Parties, is a careful empirical and theoretical analysis of how electoral systems do work in translating voter preferences in political reality. * Norman Schofield, Taussig Distinguished Professor of Political Economy, Washington University in St.Louis * This very important book reports state-of-the-art research that bridges the study of institutions, political representation, and parties' election strategies. Lawrence Ezrow employs theoretical arguments and empirical analyses of data from more than a dozen European democracies, to demonstrate that political parties respond in unexpected ways to voters' policy preferences; that party policy positioning exerts unexpected effects on election outcomes; and, that the conventional wisdom on how electoral laws affect parties' policy positioning incentives requires revision. Linking Citizens and Parties is a wide-ranging, theoretically-innovative book that marks a major advance in the study of mass-elite policy linkages in Europe. * James Adams, Professor of Political Science, University of California, Davis *