Items related to The Book: A Global History

The Book: A Global History 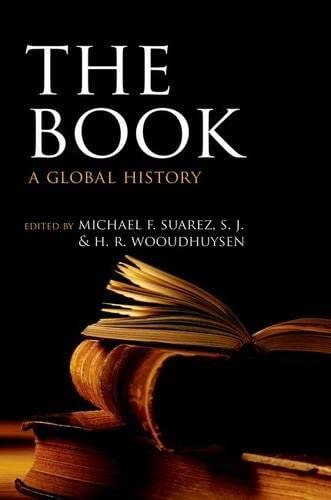 A concise edition of the highly acclaimed Oxford Companion to the Book, this book features the 51 articles from the Companion plus 3 brand new chapters in an affordable format! The 54 chapters introduce readers to the fascinating world of book history. Including 21 thematic studies on topics such as writing systems, the ancient and the medieval book, and the economics of print, as well as 33 regional and national histories, offering a truly global survey of the book around the world, The Book: A Global History is the most comprehensive work of its kind. The three new articles, specially commissioned for this edition, cover censorship, copyright and intellectual property, and book history in the Caribbean and Bermuda.

All essays are illustrated throughout with reproductions, diagrams, and examples of various typographical features.
Beautifully produced and highly informative, this is a must-have for anyone with an interest in book history and the written word.

A Look Inside: The Book: A Global History [Click Images to Enlarge]

A composing frame with two sets of cases of type: the upper case lies at a steeper angle than the lower case. By permission of Oxford University Press. Images were cut on wood at an early date and used with type to make illustrations or decorations, and sometimes even whole words. This image shows a box of John Fell’s pica italic matrices, with some steel punches for larger capitals beneath them. By permission of Oxford University Press. The basic structural features of a European bookbinding in the medieval and hand press periods. Line drawing by Chartwell Illustrators.. About the Author:

Michael F. Suarez S.J. is Professor and Director of the Rare Book School at the University of Virginia. Formerly the J. A. Kavanaugh Professor of English at Fordham University in New York and Fellow and Tutor in English at Campion Hall, Oxford, he is co-editor of The Cambridge History of the Book in Britain, Volume 5, 1695-1830 (2009) and co-general editor of The Collected Works of Gerard Manley Hopkins, 8 vols (2006- ).

H. R. Woudhuysen is Rector of Lincoln College, Oxford. He has edited The Penguin Book of Renaissance Verse (1992), with David Norbrook; Love's Labour's Lost (1998) and, with Katherine Duncan-Jones, Shakespeare's Poems (2007) for the Arden Shakespeare third series. His book Sir Philip Sidney and the Circulation of Manuscripts, 1558-1640 was published in 1996.

1. The Book: A Global History

2. The Book: A Global History

3. The Book: A Global History