Items related to Advancing the Ball: Race, Reformation, and the Quest...

Duru, N. Jeremi Advancing the Ball: Race, Reformation, and the Quest for Equal Coaching Opportunity in the NFL (Law and Current Events Masters)

Advancing the Ball: Race, Reformation, and the Quest for Equal Coaching Opportunity in the NFL (Law and Current Events Masters) 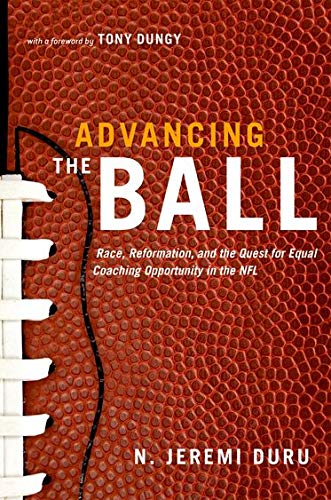 Following the NFL's desegregation in 1946, opportunities became increasingly plentiful for African American players--but not African American coaches. Although Major League Baseball and the NBA made progress in this regard over the years, the NFL's head coaches were almost exclusively white up until the mid-1990s. Advancing the Ball chronicles the campaign of former Cleveland Browns offensive lineman John Wooten to right this wrong and undo decades of discriminatory head coach hiring practices--an initiative that finally bore fruit when he joined forces with attorneys Cyrus Mehri and Johnnie Cochran. Together with a few allies, the triumvirate galvanized the NFL's African American assistant coaches to stand together for equal opportunity and convinced the league to enact the "Rooney Rule," which stipulates that every team must interview at least one minority candidate when searching for a new head coach. In doing so, they spurred a movement that would substantially impact the NFL and, potentially, the nation. Featuring an impassioned foreword by Coach Tony Dungy, Advancing the Ball offers an eye-opening, first-hand look at how a few committed individuals initiated a sea change in America's most popular sport and added an extraordinary new chapter to the civil rights story.

N. Jeremi Duru is Associate Professor of Law at Temple University. He has worked directly with the network of African American coaches in the NFL and brings an insider's perspective to his larger story about race and sports in contemporary American society.

"There's no question the Rooney Rule has changed the NFL's culture... Reaching this point was a long, difficult road, which N. Jeremi Duru explains in his outstanding new book, Advancing The Ball." --Jason Reid, The Washington Post

"A masterpiece of social inquiry, depicting an important modern-day civil rights story. Duru tells a persuasive story, in a compelling way. The book reads like a legal drama with character development, thick descriptions, suspense, and seemingly insurmountable obstacles to overcome in the fight for race reformation in the NFL.... Duru's impeccable ability to tell a compelling non-fiction story is a highlight of this work." --Law & Politics Book Review

"Former Cleveland Browns offensive lineman John Wooten . . . kicked of the campaign that led to the ending of discriminatory head-coach hiring practices. Thus the Rooney Rule was born, stipulating every team would interview at least one minority during a head-coach search. Fast forward to now. Good job, Wooten. And good job, Duru, for telling this important story." --Ebony

"My personal journey of success would have been much more difficult if not for the sacrifices of many that blazed my trail. The Fritz Pollard Alliance created a highway for expanded opportunities for African Americans, which are chronicled in this fascinating and historic book."--Warren Moon, NFL Hall of Fame Quarterback

"An incredibly interesting and enlightening read. This book should be required reading for any level of sports enthusiast, as it explains so much about the complex intersection of sport and race. Without knowing this story, you simply cannot understand the evolution of sport over the past 50 years."--Woodie Dixon, Jr., General Counsel to the Pac-12 Conference and former General Counsel to the Kansas City Chiefs

"Advancing the Ball provides a hopeful message, with engaging discussion of how policies can be instituted to correct patterns of unfairness and injustice."--Michael McCann, Sports Illustrated Legal Analyst, and Director of the Vermont Law School Sports Law Institute

"This excellent book is a must for fans of football and other sports, as well as for those with a passion for racial justice. Professor Duru offers us a thoughtful and engaging perspective on the evolution of equal treatment in professional football."--Paul C. Weiler, Professor, Harvard Law School, and Creator of Harvard's Sports and the Law Course

"Delivers a mass-market account of the history of the so-called Rooney Rule...[reminding] us that the Rooney Rule didn't emerge overnight."--Bob Hoover, Pittsburgh Post-Gazette

"If, in the old days, newspapers were the rough draft of history, then what does that make the blogs, tweets and podcasts of now? The graffiti of history? Not that there is anything wrong with that, but the 24-7 news nutcracker spits out context sparingly. That's why you need a guy like N. Jeremi Duru to write a book like Advancing The Ball: Race, Reformation, and the Quest for Equal Coaching Opportunity in the NFL.... The book is an inside job and a good one." --Geoff Hobson, Editor of Bengals.com

"A terrific book. . . I hope this book gets the audience it clearly deserves." --Dave Zirin, Host of the Edge of Sports Radio Show

1. Advancing the Ball: Race, Reformation, and the Quest for Equal Coaching Opportunity in the NFL (Law and Current Events Masters)