Items related to Death before Dying 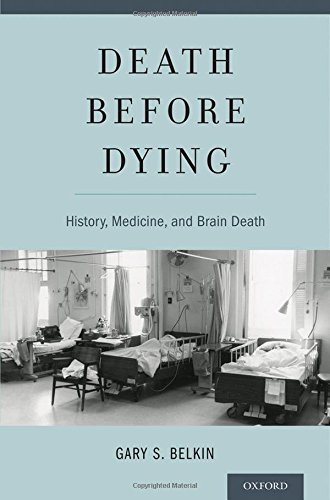 Brain death-the condition of a non-functioning brain, has been widely adopted around the world as a definition of death since it was detailed in a Report by an Ad Hoc Committee of Harvard Medical School faculty in 1968. It also remains a focus of controversy and debate, an early source of criticism and scrutiny of the bioethics movement. Death before Dying: History, Medicine, and Brain Death looks at the work of the Committee in a way that has not been attempted before in terms of tracing back the context of its own sources-the reasoning of it Chair, Henry K Beecher, and the care of patients in coma and knowledge about coma and consciousness at the time. That history requires re-thinking the debate over brain death that followed which has tended to cast the Committee's work in ways this book questions. This book, then, also questions common assumptions about the place of bioethics in medicine. This book discusses if the advent of bioethics has distorted and limited the possibilities for harnessing medicine for social progress. It challenges historical scholarship of medicine to be more curious about how medical knowledge can work as a potentially innovative source of values.

"Death before Dying is an engaging historical look at the Harvard Committee deliberations on the definition of brain death. Belkin makes use of unique and original material and depicts in great detail how it all came about. The book shows how US physicians had a "supratentorial bias" and that EEG played a prominent role before neurologists and neurosurgeons started to look below the tentorium -yes, the brainstem. The book also ventures in areas of bioethics and the law and describes its slow and thoughtful process often interrupted by major disputations and strong personal opinions. I recommend this book to anyone who is interested in this period of history and its later implications. It is filled with fascinating anecdotes." --Eelco F.M. Wijdicks, , MD, PhD, F.A.C.P. Chair, Division of Critical Care Neurology, Mayo Clinic, Rochester, MN

"This book is apt to rub some people the wrong way. For decades, The Harvard Brain Death Committee has been used as an example of how physicians in the 1960s had become too powerful. Their temerity in defining a new type of death, in part to faciliate transplantation, was a prime reason, it was argued, that bioethics needed to emerge. But using primary historical documents, Belkin ably complicates this story, suggesting that the involved physicians crafted a pragmatic and instructive solution to an emergical moral dilemma." --Barron H. Lerner, MD, PhD, author of "The Breast Cancer Wars" and "When Illness Goes Public."
"Dr Belkin has written a meticulous history of the determination of death. Most illuminating is his searching inquiry into the nature of bioethics as a formal field and its often considerable limitation in clarifying the moral ambiguities of medical practice." --- Sally Satel, MD, Yale University School of Medicine, New Haven, CT

"Gary Belkin has written an important and interesting book on brain death. As a physician he lucidly explains why the brain death debate was, and still is, of great importance. As a historian he puts that debate in the context of modern medicine and its recent changes and developments. As one interested in the ethics of medicine he tellingly shows how the debate reflects some deep and enduring arguments in philosophy and theology. One can't ask more of a book than that." --Daniel Callahan, President Emeritus, The Hastings Center, Garrison, NY
"Death before Dying is a work of admirable detail and insight." - Bulletin of the History of Medicine

Book Description Hardcover. Condition: New. Hardcover. Brain death-the condition of a non-functioning brain, has been widely adopted around the world as a definition of death since it was detailed in a Report by an Ad Hoc Committee of Harvard .Shipping may be from multiple locations in the US or from the UK, depending on stock availability. 304 pages. 0.540. Seller Inventory # 9780199898176

Book Description Hardcover. Condition: New. Hardcover. Brain death-the condition of a non-functioning brain, has been widely adopted around the world as a definition of death since it was detailed in a Report by an Ad Hoc Committe.Shipping may be from our Sydney, NSW warehouse or from our UK or US warehouse, depending on stock availability. 304 pages. 0.540. Seller Inventory # 9780199898176