Items related to Digital Dilemmas: Power, Resistance, And The Internet 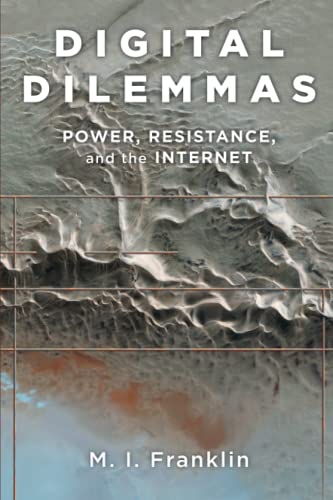 Digital Dilemmas looks at the dynamics of power and resistance surrounding the internet. It focuses on how publics, nation-states, and multilateral institutions are being continually reinvented in local and global decision-making domains that are accessed and controlled by a relative few. Importantly it unpacks the ways in which computer-mediated power relations play out as "on the ground" and "cyberspatial" practices and discourses that collude and collide with one another at the personal, community, and transnational level. Case studies include homelessness and the internet, rights-based advocacy for the online environment at the United Nations, and how the ongoing battle between proprietary and open source software designs affects ordinary people and policy-making. The result is an innovative and groundbreaking critique of the way new paradigms of power and resistance forged online reshape traditional power hierarchies offline, at home and abroad.

M.I. Franklin is Associate Professor and Director of the Global Media and Transnational Communications Program at Goldsmiths, University of London.

"This well-researched tome of contemporary digital dilemmas positions itself well among other works that have been published within the discipline. By examining specific cases in-depth against a comprehensive hypothesis, Franklin provides a nuanced argument and refreshing perspective on the complex and ever-changing dynamics brought about by the Internet." --LSE Review of Books

"Digital Dilemmas addresses an important current field of media studies. Its principal strength and originality lies in its ability to bridge social, technological and cultural approaches to the internet and to new media generally, in a space in which major studies are typically one-dimensional. Franklin's strong and broad-ranging grounding in social theory is evident in her clear explication of the paradox dilemma of a globally distributed technology which is, at the same time, controlled by a small number of hardware and software interests." --Arjun Appadurai, New York University

"Who 'owns' the internet? Are 'we' getting the internet 'we' deserve? M.I. Franklin's new work critically analyzes how the internet developed over the past decades through the concepts of nation-state, publics/public spheres and governmentality. A thought-provoking book, Digital Dilemmas tackles a number of poignant questions arising from tensions between the internet's co-habitants." --José van Dijck, University of Amsterdam

"Drawing on over a decade of fieldwork, scholarship and activism, and spanning an impressive range of sites (from courtroom to homeless refuge and UN policy forum), M.I. Franklin's exciting new book offers a red thread towards a sharper understanding of the entangled challenges and normative choices of the internet age. Franklin, through her careful unpicking of the complexities, gets us to a place where we start to grasp 'another way' of thinking about the internet, and we are all in her debt." --Nick Couldry, London School of Economics and Political Science

"Carefully and methodically, Digital Dilemmas unravels the mythologies of the internet to provide a persuasive sense of the power struggles, dominations, and resistances that inform the internet's many meanings for people's lives from the homeless on the streets to the gilded halls of the United Nations." --J.P. Singh, George Mason University

3. Digital Dilemmas: Power, Resistance, and the Internet (Paperback or Softback)