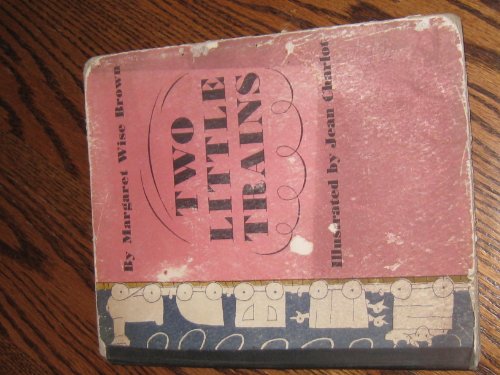 Two-time Caldecott Medalists Leo and Diane Dillon (Why Mosquitoes Buzz in People's Ears and Ashanti to Zulu: African Traditions) have joined their ingenious artwork with the magic of Margaret Wise Brown's words. Brown, beloved author of Goodnight Moon, wrote Two Little Trains more than 50 years ago. Now a new generation of the youngest readers will be filled with wonder at this timeless story with its splendid new illustrations.

Two trains are heading west. One is streamlined, the other small and old. On their parallel journeys, the trains encounter rivers, hills, snow, and dust storms, but neither is thwarted. But look closer and see that these two trains, though similar in many ways, have a surprising difference: one is the real thing, traversing the countryside, and the other is a toy, making its way across rug fringe "tracks," along the edge of a bathtub, through a tunnel made from a book, and past a broom and dust pan. Brown's brilliant yet simple text and the Dillons' clever and striking pictures, will serve as inspiration to many flights of fancy in young readers' minds. Truly exquisite. (Ages 3 to 6) --Emilie Coulter

Two trains are heading West. One is a shiny train, moving fast. The other Is an old train, moving not so fast. What can they have in common? Much more than you think!

This treasured story from the author of Goodnight Moon has been newly illustrated by two-time Caldecott Medalists Leo and Diane Dillon. Margaret Wise Brown's brilliantly simple text is fittingly showcased by the Dillons' extraordinarily inventive illustrations. You'll be surprised where the two little trains take you. Come and see!

Book Description HarperCollins Publishers. Hardcover. Condition: Good. A copy that has been read, but remains in clean condition. All pages are intact, and the cover is intact. The spine may show signs of wear. Pages can include limited notes and highlighting, and the copy can include previous owner inscriptions. At ThriftBooks, our motto is: Read More, Spend Less. Seller Inventory # G0201093812I3N00

Book Description HarperCollins Publishers. Hardcover. Condition: Very Good. A copy that has been read, but remains in excellent condition. Pages are intact and are not marred by notes or highlighting, but may contain a neat previous owner name. The spine remains undamaged. At ThriftBooks, our motto is: Read More, Spend Less. Seller Inventory # G0201093812I4N00