Items related to Wings Of Morning 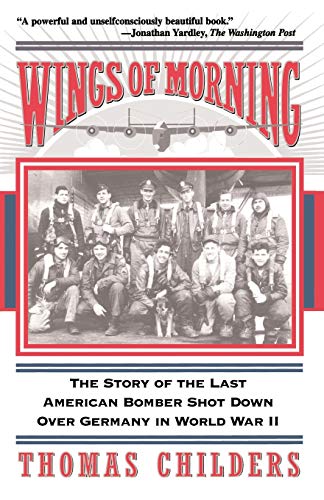 On April 21, 1945, the twelve-member crew of the Black Cat set off on one of the last air missions in the European theater of World War II. Ten never came back. This is the story of that crew—where they came from, how they trained, what it was like to fly a B-24 through enemy flak, and who was waiting for them to come home.Historian Thomas Childers, nephew of the Black Cat's radio operator, has reconstructed the lives and tragic deaths of these men through their letters home and through in-depth interviews, both with their families and with German villagers who lived near the crash site. In so doing he unearths confusion about the exact number of crash survivors and ugly rumors of their fate at the hands of the German villagers. His search to determine what really happened leads him to the crash site outside of Regensburg to lay the mystery to rest.In the tradition of Young Men and Fire, Wings of Morning is history as commemoration-an evocation of people and events that brings to life a story of love, loss, and a family's quest for truth.

Thomas Childers is a professor of history at the University of Pennsylvania.

After their son died when flak destroyed his plane on April 21, 1945, the parents of Howard Goodner endured the frustrating process of finding out from the War Department exactly what happened. They never did find out. In 1992, Goodner's mother died, having kept through the years a cache of letters her son had written home. They inspired Childers, nephew to the long-dead airman and a professional historian of Nazi electoral politics, to reconstruct his uncle Howard's and his crewmates' wartime experiences. This result, a searching and emotional exploration, powerfully evokes the tension and relaxation cycle of flying combat missions, and as Childers builds toward the fateful day, he deeply and deftly involves readers to the extent that Goodner and comrades seem to be their own relatives and their own inconsolable losses. Quite a literary feat. As Childers stands on the spot from which his uncle departed on the last (and unnecessary) mission, as he presses toward the truth through witnesses to the crash and the relative documents, it must be a stony heart that doesn't share his sorrow and tears. Imaginative and emotive, and factually unerring, this outstanding remembrance is possibly the most original title among this year's anniversary works. Gilbert Taylor

1. Wings of Morning: The Story of the Last American Bomber Shot Down Over Germany in World War II (Paperback or Softback)

3. Wings Of Morning: The Story Of The Last American Bomber Shot Down Over Germany In World War II

6. Wings Of Morning: The Story Of The Last American Bomber Shot Down Over Germany In World War II

7. Wings Of Morning: The Story of the Last American Bomber Shot Down Over Germany in World War II

8. Wings of Morning: The Story of the Last American Bomber Shot Down over Germany in World War II