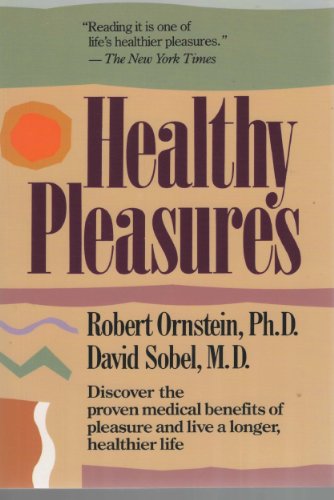 Robert Ornstein, Ph.D., is a psychologist, brain researcher, and writer. He co-wrote The Psychology of Consciousness, which has sold more than 1 million copies worldwide, and more recently, The Healing Brain.

"At nearly every turn, pleasure has gotten a bad name," write the authors, who tell us that in pursuit of longevity Americans have become overly abstemious. Psychologist Ornstein and Sobel, director of preventive medicine at the Kaiser-Permanente HMO, believe that eradicating all of life's pleasures--whether chocolate, alcohol or even an occasional puff of tobacco--represents a far more serious threat to our well-being than whatever damage may be wreaked by occasionally indulging. Deploring what they call "medical terrorism," they point out that some once-dire findings on health hazards have been reversed, disputed or exaggerated. The authors' secret for happiness: forget asceticism in the name of health. We should touch each other more often, learn to take life a little more lightly, partake in some form of gentle physical exercise, nap when necessary and learn to be less self-centered generally. If this advice seems a touch obvious, it may bear repeating nonetheless. 75,000 printing; Literary Guild/Doubleday Book Club alternate; first serial to American Health Magazine; major ad/promo.
Copyright 1989 Reed Business Information, Inc.