Items related to Atlas of Cyberspace 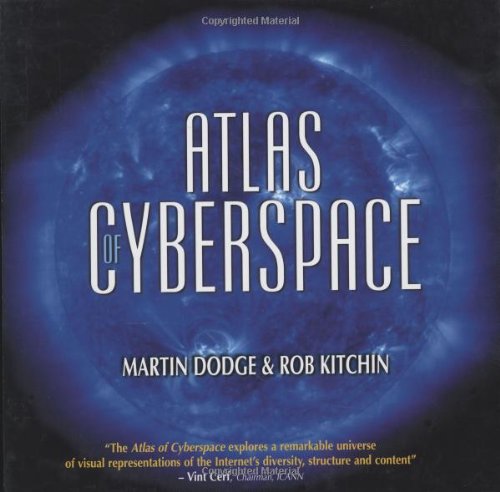 The fledgling field of cybergeography seeks to provide a visual "big picture" of the shape-shifting entity that is the Internet, giving people a sense of space that is difficult to grasp by navigation alone. Dodge (University College, London) and Kitchin (National U. of Ireland), who also wrote Mapping cyberspace , spent five years collating maps and research papers and interviewing the maps' creators to produce this first, comprehensive guide to the visual representation of cyberspace media. A book that is beautiful as well as densely packed with information, it covers facets of the Net from the history of telecommunications to Web sites, e-mail, virtual worlds, and game space. Wide format: 10.25x10<">. Annotation c. Book News, Inc., Portland, OR (booknews.com)

We don't normally consider maps contentious, but the Atlas of Cyberspace makes us think otherwise. Information cartographers Martin Dodge and Rob Kitchin show off a wide range of possibilities in representing the vast realms of data existing on and supporting the Internet. Since so many of these models were created to display never-before-charted territories, the book is largely devoted to analyzing their accuracy, ease of development and use, potential for abuse, and other qualities.

Chapters cover infrastructural elements, the Web, communities, and creative renderings of cyberspace, and contain both compelling images and thought-provoking texts. Though it ends up feeling more like a catalog of visual display methods than a reference book detailing virtual geography, its examples still inform and startle the viewer with unexpected transformations of data into understanding, and, occasionally, art. --Rob Lightner

For thousands of years, people have created maps of the world around them -- cave paintings, drawings in the sand, pencil sketches, lavish manuscripts, 3D models and, more recently, satellite images and computer-generated simulations. Now, a new generation of cartographers is focusing on a different realm: cyberspace. Here for the first time is an examination and selection of their maps, gathered together into one comprehensive source: the Atlas of Cyberspace. Written in accessible style and illustrated with over 300 full colour images, the Atlas of Cyberspace catalogues thirty year's worth of maps to reveal the rich and varied landscapes of cyberspace -- a world occupied by half a billion users.

The Atlas explores the new cartographic and visualization techniques being employed in the mapping of cyberspace, concentrating on the following main areas:

Based on extensive research and written by two of the world's leading cybergeography experts, the Atlas of Cyberspace provides an unprecedented insight into the shape of the Internet and World Wide Web. For anyone with an interest in the structure, content and social dimension of the online world, this is a fascinating and invaluable resource.