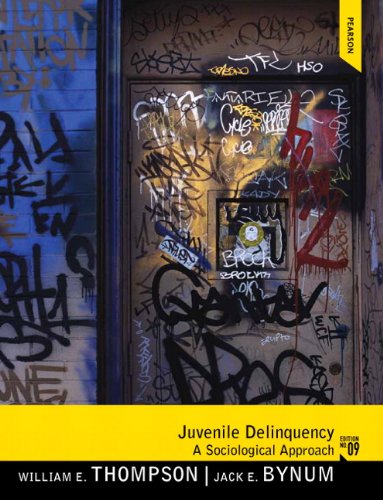 Taking a sociological approach, this text discusses delinquency as it relates to and emerges from the youth's family, neighborhood, school, peer group, social class, and overall cultural and social environment. The authors incorporate contributions from sociologists, psychologists, social workers, criminologists, and other specialists, who have sought to understand, explain, control, and prevent juvenile delinquency.

William E. Thompson was born and raised in Tulsa, Oklahoma and was the first member of his family to receive a high school diploma.  He received his bachelor’s degree from Northeastern State University, a master’s degree from Missouri State University, and earned his Ph.D. in sociology from Oklahoma State University.  Thompson has authored and coauthored more than fifty articles published in professional journals, including dozens reprinted in textbooks and anthologies.  He is the coauthor of Society in Focus:  An Introduction to Sociology (now in its 7th edition), one of the leading textbooks in introductory sociology courses, and Juvenile Delinquency:  A Sociological Approach (in its 8th edition), a leading textbook in the area of delinquency studies.  He also has coauthored an anthology on classic and contemporary readings in juvenile delinquency, a small treatise on sociology and mass media, and is the author of The Glass House, a life-story of his mother’s courageous battle with cancer.

Thompson began his college teaching career at the University of Tulsa.  He spent the next ten years at Emporia State University, where he served as Chair of the Division of Sociology, Family Sciences, and Anthropology.  Thompson then moved to Texas A&M University-Commerce, where he served five years as Head of the Department of Sociology and Criminal Justice, and is currently a Professor of Sociology and Criminal Justice.  He has also taught for the University of Southern Mississippi in the British Studies Program in London and the Caribbean Studies Program in Ocho Rios, Jamaica.  He also has been an invited Guest Lecturer on Juvenile Crime and the Media at Shanghai Normal University and the Shanghai Academy of Social Sciences in China.

In 1993, Thompson received an Outstanding Teaching Award from the Texas Association of College Teachers, and in 1994, he won the Distinguished Faculty Award for Research and Teaching at Texas A&M-Commerce.  In 1996, Thompson was named the Outstanding Alumnus by the College of Social and Behavioral Sciences at Northeastern State University.  In 2009 he received the prestigious “Spirit of Mayo Award” named after Texas A&M University-Commerce’s founder and awarded by the president for outstanding commitment to undergraduate students’ success.

Dr. Thompson has been married to his wife Marilyn for 37 years.  They have two grown children and one grandchild.  For fun, Thompson plays drums in a rock ‘n roll band and rides his motorcycle.