Items related to Visions of America: A History of the United States,... 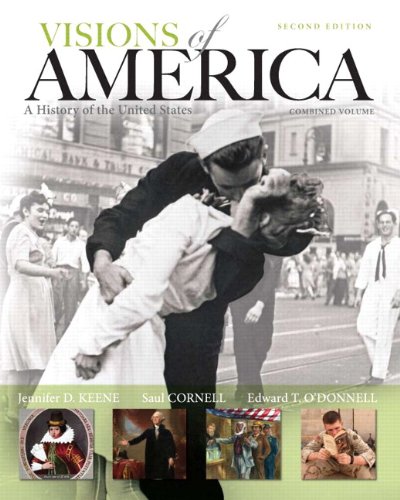 ALERT: Before you purchase, check with your instructor or review your course syllabus to ensure that you select the correct ISBN. Several versions of Pearson's MyLab & Mastering products exist for each title, including customized versions for individual schools, and registrations are not transferable. In addition, you may need a CourseID, provided by your instructor, to register for and use Pearson's MyLab & Mastering products.

Access codes for Pearson's MyLab & Mastering products may not be included when purchasing or renting from companies other than Pearson; check with the seller before completing your purchase.

Access codes that are purchased from sellers other than Pearson carry a higher risk of being either the wrong ISBN or a previously redeemed code. Check with the seller prior to purchase.

We’ve made the second edition of this program even better by adding engaging new features and even easier access to new teaching resources. And, thorough integration with the new MyHistoryLab enables instructors to personalize learning for each student.

Jennifer D. Keene is a Professor of History and chair of the History Department at Chapman University in Orange, California. Dr. Keene has published three books on the American involvement in the First World War: Doughboys, the Great War and the Remaking of America (2001); The United States and the First World War (2000); and World War I: The American Soldier Experience (2011). She has received numerous fellowships for her research, including a Mellon Fellowship, a National Research Council Postdoctoral Award, and Fulbright Senior Scholar Awards to Australia and France. Her articles have appeared in the Annales de Démographie Historique, Peace & Change, Intelligence and National Security, and Military Psychology. Dr. Keene served as an associate editor for the Encyclopedia of War and American Society (2005), which won the Society of Military History’s prize for best reference book. She works closely with the Gilder-Lehrman Institute, offering Teaching American History workshops for secondary school teachers throughout the country.

Saul Cornell is the Paul and Diane Guenther Chair in American History at Fordham University in New York. Professor Cornell has also taught at the Ohio State University, the College of William and Mary, Leiden University in the Netherlands, and has been a visiting scholar at Yale Law School. He is the author of A Well Regulated Militia: The Founding Fathers and the Origins of Gun Control (Langum Prize in Legal History) and The Other Founders: Anti-Federalism and the Dissenting Tradition in America, 1788–1828 (Society of the Cincinnati Book Prize), both of which were nominated for the Pulitzer Prize. His articles have appeared in the Journal of American History, the William and Mary Quarterly, American Studies, Law and History Review, and dozens of leading law reviews. His work has been cited by the U.S. Supreme Court and several state Supreme Courts. He lectures widely on topics in legal and constitutional history and the use of visual materials to teach American history.

Edward T. O’Donnell is an Associate Professor of History at the College of the Holy Cross in Worcester, Massachusetts. He taught previously at Hunter College, City University of New York. He is the author of Ship Ablaze: The Tragedy of the Steamboat General

Slocum (Random House, 2003) and the forthcoming Talisman of a Lost Hope: Henry George and Gilded Age America (Columbia University Press). His articles have appeared in The Journal of Urban History, The Journal of the Gilded Age and Progressive Era, and The Public Historian. He is also very active in the field of public history, curating exhibits and consulting at institutions such as the Lower East Side Tenement Museum and the New York Historical Society. Since 2002, he has worked with more than fifty Teaching American History grant programs across the country, offering lectures and workshops for middle and high school teachers.

"The visual element of this text is great. Students are media consumers; this content allow those well formed habits to be used for learning. The visuals on the page are extremely engaging and grab the reader's attention." - Julian Chambliss

"The greatest strength of Visions of America is the 'read-ability' and the relaxed narrative form of writing. The writing style helps keep students engaged in the chapter and keeps them from losing interest. The pictures, illustrations and maps help make the material more reader friendly as it engages other aspects of learning comprehesion." - Robert Brennan

Book Description Pearson 2012-04-05, 2012. Paperback. Condition: Good. Item is in good condition. Some moderate creases and wear. This item may not come with CDs or additional parts including access codes for textbooks. Might be an ex-library copy and contain writing/highlighting. Seller Inventory # DS-0205251617-3

Book Description Condition: good. Item may not include associated media. Used books may have cover wear and markings inside. Access codes and supplements such as CDs or software are not guaranteed with used items. Seller Inventory # pb2-341a

4. Visions of America: A History of the United States, Combined Volume Plus NEW MyHistoryLab with eText (2nd Edition)

Book Description Prentice Hall, 1913. Condition: Good. 2nd Edition. Shows some signs of wear, and may have some markings on the inside. Seller Inventory # GRP116671648