Items related to Archaeology: The Science of the Human Past (2nd Edition)

Archaeology: The Science of the Human Past (2nd Edition) 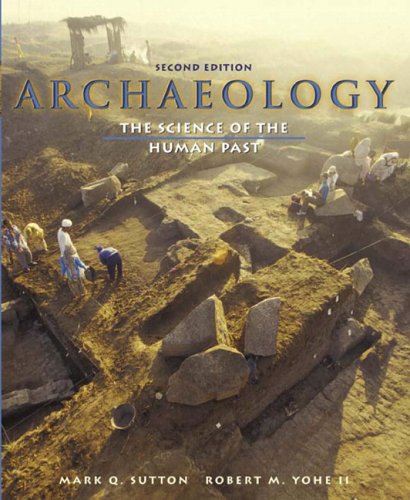 Illuminating the world of archaeology.

Archaeology conveys the excitement of archaeological discovery and explains how archaeologists think as they scientifically find, analyze, and interpret evidence. The main objective of this text is to provide an introduction to the broad and fascinating world of archaeology from the scientific perspective. Discussions on the theoretical aspects of archaeology, as well as the practical applications of what is learned about the past, have been updated and expanded upon in this fourth edition.

The second edition of this recent entry into the introductory archaeology market conveys the excitement of archaeological discovery while it explains how archaeologists think as they scientifically find, analyze, and interpret evidence.

Highlights of the Second Edition

Mark Q. Sutton decided to become an archaeologist when he was 10 years old after reading a book on archaeology. In 1968, while still in high school, he took advantage of the opportunity to participate in archaeological excavations conducted by the local community college. He went on to earn a B.A. (1972), an M.A. (1977), and a Ph.D. (1987) in anthropology. He worked as an archaeologist for the U.S. Air Force, the U.S. Bureau of Land Management, and various private consulting firms and taught at a number of community colleges and universities. He has been at California State University, Bakersfield, since 1987 and is a professor of anthropology. Dr. Sutton has conducted hundreds of surveys and has excavated at more than 100 sites in western North America. He has published over 140 books, monographs, and articles on archaeology.

Robert M. Yohe II received his B.A. in anthropology at California State University, San Bernardino, in 1983 and his M.A. and Ph.D. in anthropology from the University of California, Riverside, in 1990 and 1992, respectively. From 1990 to 1993, he served as assistant director and then director of the Cultural Resources Facility at California State University, Bakersfield, and was an adjunct lecturer in the Department of Sociology and Anthropology. In 1993, Dr. Yohe was appointed State Archaeologist and administrator of the Idaho State Historic Preservation Office. He also served as director of the Archaeological Survey of Idaho and Deputy State Historic Preservation Officer. During this same period, he taught anthropology courses at Boise State University. In 1996 he was appointed interim State Historic Preservation Officer, a position he held until his departure in late 1999 to join the faculty at California State University, Bakersfield, as an assistant professor of anthropology. He is now an associate professor of anthropology and also serves as director of the Museum of Anthropology at CSUB and coordinator of the Southern San Joaquin Valley Historic Resource Information Center. In mid-2003, he was made director of the Laboratory of Archaeological Sciences at CSUB.Dr.Yohe has conducted research in the deserts of western North America for the past 24 years.More recently, he has conducted excavations in Middle Egypt to recover mummies dating to the Roman period.

1. Archaeology: The Science of the Human Past (2nd Edition)

2. Archaeology: The Science of the Human Past (2nd Edition)

3. Archaeology: The Science of the Human Past (2nd Edition) Sutton, Mark Q. and Yohe, Robert M.

4. Archaeology: The Science of the Human Past (2nd Edition) Sutton, Mark Q. and Yohe, Robert M.