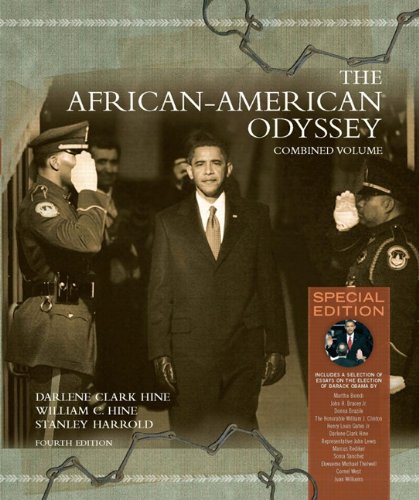 This updated edition brings the story up to 2008 and the historic election of the first African-American President of the United States, Barack Obama.

Told through a clear, direct, and flowing narrative by leading scholars in the field, The African-American Odyssey draws on recent research to present black history within broad social, cultural, and political frameworks.  From Africa to the Twenty-First Century, this book follows their long, turbulent journey, including the rich culture that African Americans have nurtured throughout their history and the many-faceted quest for freedom in which African Americans have sought to counter oppression and racism.  This text also recognizes the diversity within the African-American sphere — providing coverage of all class and of women and balancing the lives of ordinary men and women with the accounts and actions of black leaders and individuals.

Darlene Clark Hine is Board of Trustees Professor of African-American Studies and Professor of History at Northwestern University.  She is a fellow of the American Academy of Arts and Sciences, past President of the Organization of American Historians and of the Southern Historical Association.  Hine received her BA at Roosevelt University in Chicago, and her MA and Ph.D. from Kent State University, Kent, Ohio. Hine has taught at South Carolina State University and at Purdue University. She was a fellow at the Center for Advanced Study in the Behavioral Sciences at Stanford University and at the Radcliffe Institute for Advanced Studies at Harvard University. She is the author and/or co-editor of fifteen books, most recently The Harvard Guide to African American History (Cambridge: Harvard University Press, 2000) coedited with Evelyn Brooks Higginbotham and Leon Litwack. She coedited a two volume set with Earnestine Jenkins, A Question of Manhood: A Reader in Black Men’s History and Masculinity (Bloomington: Indiana University Press, 1999, 2001); and with Jacqueline McLeod, Crossing Boundaries: Comparative History of Black People in Diaspora (Bloomington: Indiana University Press, 2000pk). With Kathleen Thompson she wrote A Shining Thread of Hope: The History of Black Women in America (New York: Broadway Books, 1998), and edited with Barry Gaspar, More Than Chattel: Black Women and Slavery in the Americas (Bloomington: Indiana University Press, 1996). She won the Dartmouth Medal of the American Library Association for the reference volumes coedited with Elsa Barkley Brown and Rosalyn Terborg-Penn, Black Women in America: An Historical Encyclopedia (New York: Carlson Publishing, 1993). She is the author of Black Women in White: Racial Conflict and Cooperation in the Nursing Profession, 1890—1950 (Bloomington: Indiana University Press, 1989). Her forthcoming book is entitled The Black Professional Class: Physicians, Nurses, Lawyers, and the Origins of the Civil Rights Movement, 1890—1955.

Stanley Harrold, Professor of History at South Carolina State University, received his bachelor’s degree from Allegheny College and his master’s and Ph.D. degrees from Kent State University. He is coeditor of Southern Dissent, a book series published by the University Press of Florida. He received during the 1990s two National Endowment for the Humanities Fellowships to pursue research dealing with the antislavery movement. In 2005 he received a Faculty Research Award from the NEH in support of his current research on physical conflict along America’s North-South sectional border from the 1780s to the Civil War.  His books include: Gamaliel Bailey and Antislavery Union (Kent, Ohio:  Kent State University Press, 1986), The Abolitionists and the South (Lexington: University Press of Kentucky, 1995), Antislavery Violence: Sectional, Racial, and Cultural Conflict in Antebellum America (co-edited with John R. McKivigan; Knoxville: University of Tennessee Press,  1999), American Abolitionists (Harlow, U.K.: Longman, 2001), Subversives: Antislavery Community in Washington, D.C., 18280-1865 (Baton Rouge: Louisiana State Univeristy Press, 2003), The Rise of Aggressive Abolitionism: Addresses to the Slaves (Lexington: University Press of Kentucky, 2004), and Civil War and Reconstruction: A Documentary Reader (Oxford, U.K.: Blackwell, 2007). He has published articles in Civil War History, Journal of Southern History, Radical History Review, and Journal of the Early Republic.