Items related to Video on DVD for Points de départ 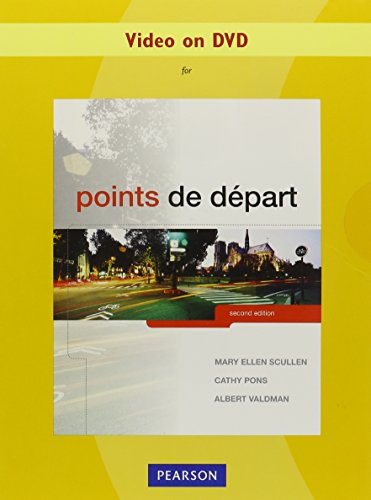 The beautifully produced video, shot on location, introduces native speakers from across the Francophone world, who address the topics and themes of each chapter in varied settings and contexts. Carefully integrated with the Points de départ and Vie et culture sections through explicit activities and extensive annotations to the instructor, the video is easy to incorporate into daily lesson plans. In each chapter, the textbook’s Observons exercise and the Video Manual activities take a process-oriented approach to the development of viewing skills.

Cathy Pons grew up hearing French spoken by her grandparents but only began study of the language in high school. After completing a BA in French at the University of North Carolina at Greensboro, she spent a year in France as a Fulbright Teaching Assistant. Pons completed her doctorate in French linguistics at Indiana University where, as an Assistant Professor, she directed the elementary French program and the MA in French instruction. Pons served on the faculty of several AATF Summer Institutes and on the Executive Board of the Indiana chapter of AATF. Teaching at the University of North Carolina at Asheville since 1995, Pons is Associate Professor in the Department of Foreign Languages. She is past president of the Foreign Language Association of North Carolina and has received numerous grants in support of study abroad programs for students and faculty. With more than twenty-five years' experience in elementary French teaching and teacher preparation, Pons finds the classroom to be a stimulating environment. Mary Ellen Scullen has been enamored of French from her first exposure in the seventh grade. After completing her BA in French at Kalamazoo College in Michigan, she went to Tours, France to be a French government sponsored teaching assistant for one year. Three years later, Scullen returned to the US with a "Licence de Lettres modernes, mention Francais Language Etrangere" and a "Maitrise de Francais Langue Etrangere "from "Universite Francois Rabelais" in Tours. After teaching at Kalamazoo College for a year, Scullen went to Indiana University where she earned a joint PhD in French Linguistics and Theoretical Linguistics in 1993. Scullen has taught French language, culture, and linguistics, coordinated the basic French language program, and supervised teaching assistants at the University of Louisville and since 1998 at the University of Maryland, College Park. She also had the opportunity to teach French in Southern Africa at the University of Malawi from 1995-1997 and to serve as the Resident Director for the Maryland-in-Nice program in Nice, France from 2002-2003. For the past several years, Scullen has been involved in training new teaching assistants not only in French, but also in Spanish, German, Russian and Japanese. She finds working with new teaching assistants to be highly rewarding, if not occasionally frustrating, and she truly loves being in the classroom with first-year students. A native of France, Albert Valdman earned his B.A. in Romance Languages at the University of Pennsylvania and his Ph.D. in French linguistics at Cornell University. Currently a Rudy Professor of French & Italian and Linguistics and Director of the Creole Institute at Indiana University, Valdman has taught French and linguistics at Indiana University since 1960. He has served as chair of the Department of Linguistics, Chair of the Committee for Research and Development in Language Instruction, Director of the graduate program in French Linguistics, and Director of French Language Instruction. Valdman has written and researched in a broad range of fields of linguistics, on issues in second language learning, and on the French language. He is a leading specialist of Creole languages related to French and was named Commandeur dans l'Ordre des Palmes Academiques by the French government for his contributions to French studies. He is the founder and currenteditor-in-chief of the journal, Studies in Second Language Acquisition, and is past president of the American Association of Teachers of French.
Albert Valdman is Rudy Professor of French, Italian, and Linguistics (emeritus) and the director of the Creole Institute at Indiana University. He is also the editor of the "Haitian CreoleaEnglish Bilingual Dictionary".