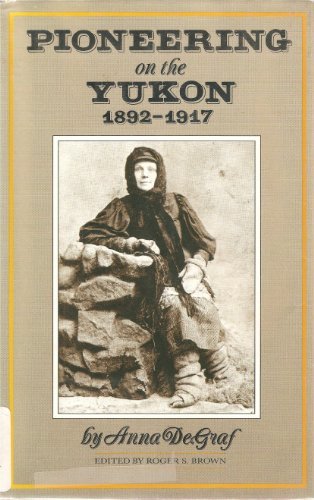 Anna DeGraf, an independent pioneer, recounts her twenty-five years of adventure in Alaska and the Yukon Territory before, during, and after the Gold Rush

German-born DeGraf was 53 and walked with a crutch when she went to Alaska in 1892 to search for her son. Although she never found him, she lived and traveled in Alaska until she was 86. She supported herself by sewing and retailing, shrugged off cold and hardship, and was "Mother" to showgirls, miners, lawmen, Indians, and occasionally outlaws. Back in California, she worked as wardrobe lady at the Pantages Theater until she was past 90. This engaging memoir, written during those last years, was found in a trunk in 1982 and edited by a great-grandson. Not a literary triumph, but readers won't forget DeGraf. A good purchase for general collections.
-Nancy C. Cridland, Indiana Univ. Libs., Bloomington
Copyright 1992 Reed Business Information, Inc.