Items related to African Exodus: The Origins of Modern Humanity 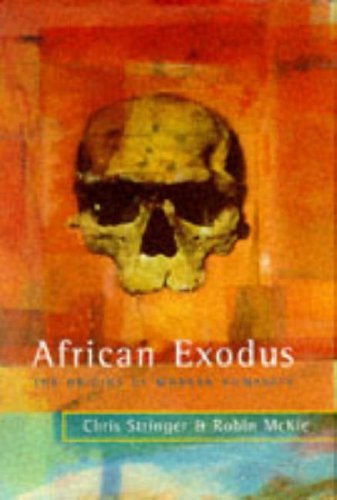 The theory of an African genesis for modern humanity is one of the most controversial in science. It is based on a revolution in the history and anthropology of early humans and this book explains the evidence for this view of our species' origin. A superb, exciting and above all readable account of the long process which 'transformed us from minor bit players in an ecological soap opera into evolutionary superstars'.

Ever since Darwin first suggested that humans are descended from apes, the theory of evolution has engendered a firestorm of controversy. But the schism between creationism and evolution is by no means the only source of disagreement; even within the evolutionist camp there are fierce divisions. Are all humans part of a single species comprised of many different varieties? Or is each race a separate species? Even Darwin had no easy answer for that one. Some scientists, including Carleton Coon, believe that Homo erectus began in Africa, then migrated to different locations in the world, where it evolved into Homo sapiens at different rates--Europeans and Asians evolved quickly, while other races remained more "primitive." Others, such as author Christopher Stringer, agree that Homo erectus spread across Asia and Europe, but became extinct everywhere but in Africa, where they continued to evolve. Eventually, a new and improved Homo sapiens swept once more out of Africa--this time to stay.

There's plenty of paleontological and genetic evidence to support Stringer's point of view, and he argues it convincingly. Short of the invention of a time machine, African Exodus is the next best way to revisit the origins of modern man.

Chris Stringer is the head of the Human Origins Group at the Natural History Museum in London. In 1994 he provided the key interpretations of fossil remains of the largest early human ever found in Britain. Robin McKie is the Science Editor of The Observer.