Items related to All the Birds, Singing

By (author) Evie Wyld All the Birds, Singing

All the Birds, Singing 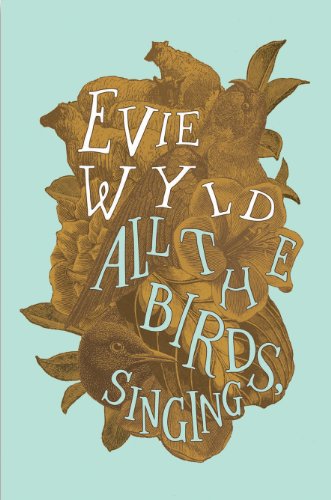 Jake Whyte is the sole resident of an old farmhouse on an unnamed British island, a place of ceaseless rains and battering winds. It's just her, her untamed companion, Dog, and a flock of sheep. Which is how she wanted it to be. But something is coming for the sheep - every few nights it picks one off, leaves it in rags. It could be anything.

EVIE WYLD grew up in Australia and London, where she currently resides. She has won the John Llewellyn-Rhys prize and a Betty Trask Award, and she has been short-listed for the Orange Award for New Writers, the International IMPAC Dublin Literary Award, the Commonwealth Writers Prize, and the Costa Novel Award.

Another sheep, mangled and bled out, her innards not yet crusting and the vapours rising from her like a steamed pudding. Crows, their beaks shining, strutting and rasping, and when I waved my stick they flew to the trees and watched, flaring out their wings, singing, if you could call it that. I shoved my boot in Dog’s face to stop him from taking a string of her away with him as a souvenir, and he kept close by my side as I wheeled the carcass out of the field and down into the woolshed.

I’d been up that morning, before the light came through, out there, talking to myself, telling the dog about the things that needed doing as the blackbirds in the hawthorn started up. Like a mad woman, listening to her own voice, the wind shoving it back down my throat and hooting over my open mouth like it had done every morning since I moved to the island. With the trees rattling in the copse and the sheep blaring out behind me, the same trees, the same wind and sheep.

That made two deaths in a month. The rain started to come down, and a sudden gust of wind flung sheep shit at the back of my neck so it stung. I pulled up my collar and shielded my eyes with my hand.

“What are you laughing at?” I shouted at the crows and lobbed a stone at them. I wiped my eyes with the back of my hand and breathed in and out heavily to get rid of the blood smell. The crows were silent. When I turned to look, five of them sat in a row on the same branch, eyeing me but not speaking. The wind blew my hair in my eyes.

The farm shop at Marling had a warped and faded sign at the foot of its gate that read FREE BABY GUINEA PIGS. There was never any trace of the free guinea pigs and I had passed the point of being able to ask. The pale daughter of the owner was there, doing a crossword. She looked up at me, then looked back down like she was embarrassed.

She blushed but gave me the smallest of acknowledgements. She wore a thick green tracksuit and her hair was in a ponytail. Around her eyes was the faint redness that came after a night of crying or drinking.

Normally the potatoes from that place were good, but they all gave a little bit when I picked them up. I put them back down and moved over to tomatoes, but they weren’t any good either. I looked up out the window to where the farm’s greenhouse stood and saw the glass was all broken.

“Hey,” I said to the girl, who when I turned around was already looking at me, sucking the end of her pencil. “What happened to your greenhouse?”

“The wind,” she said, taking her pencil to the side of her mouth just for a moment. “Dad said to say the wind blew it in.”

I could see the glass scattered outside where normally they kept pots of ugly pink cyclamen with a sign that said THE JEWEL FOR YOUR WINTER GARDEN. Just black earth and glass now.

“Things always get mad on New Year’s Eve,” said the girl in an older voice that surprised both of us. She blushed deeper and turned her eyes back to her crossword. In the greenhouse, the man who normally ran the shop sat with his head in his hands.

I took some oranges and leeks and lemons to the counter. I didn’t need anything, the trip was more about the drive than the supplies. The girl dropped her pencil out of her mouth and started to count oranges, but wasn’t sure of herself and started again a few times over. There was a smell of alcohol about her, masked by too much perfume. A hangover then. I imagined an argument with her father. I looked up at the greenhouse again, the man in it still with his head in his hands, the wind blowing through.

“Are there nine there?” she asked, and even though I hadn’t counted as I put them in the basket I said yes. She tapped things into the till.

“Must be hard to lose the greenhouse,” I said, noticing a small blue bruise at the girl’s temple. She didn’t look up.

“It’s not so bad. We should have had an order over from the mainland, but the ferry’s not going today.”

“The ferry’s not going?”

“Weather’s too bad,” she said, again in that old voice that embarrassed us both.

“I’ve never known that to happen.”

“It happens,” she said, putting my oranges in one bag and the rest in another. “They built the new boats too big so they aren’t safe in bad weather.”

“Do you know what the forecast is?”

The girl glanced up at me quickly and lowered her eyes again.

“No. Four pounds twenty please.” She slowly counted out my money. It took two goes to get the change right. I wondered what new thing she’d heard about me. It was time to leave, but I didn’t move.

“So what’s with the free guinea pigs?”

The flush came back to her face. “They’ve gone. We gave them to my brother’s snake. There were loads.”

The girl smiled. “It was years ago.”

The girl put the pencil back in her mouth and her eyes fluttered back down to her crossword. She was just colouring in the white squares, it turned out.

In the truck, I found I had left the oranges in the shop. I looked out of my rear-view mirror at the smashed greenhouse and saw the man inside standing up with his hands on his hips looking at me. I locked the doors and drove away without the oranges.

It started to rain heavily, and I turned up the heating and put the wipers on full speed. We drove past the spot I usually stopped to walk Dog and he sat in the passenger seat and stared at me hard, and every time I turned to look at him he put his ears up, like we were mid-conversation and I was avoiding his look. “So what?” I said. “You’re a dog.” And then he turned around and looked out the window.

Midway home it caught up with me and I pulled over into the entrance to an empty field. Dog gazed stoically out the window, still and calm, and I pressed my thumb into the bridge of my nose to try and take away the prickling, clung on to the skin of my chest with the nails of my other hand to melt away that old -thudding ache that came with losing a sheep, a bead of blood landing in an open eye. I cried drily, honking and with my mouth open, rocking the truck and feeling something grappling around inside me getting no closer to coming out. Have a good cry; it was the kind of thing Mum’d say to a triplet in the hope a visit to the hospital wasn’t necessary. Like the time Cleve fell out of a tree and cried it out, and we found out later he had a broken arm. But there was nothing good in my crying—it prevented me from breathing, it hurt. I stopped once my nose began to bleed, cleaned it up with the shammy I used on the days the windows were iced on the inside and drove home, calmly. On the Military Road near to the turning home, some teenagers fondled about at the bus stop. When they saw me coming one of the boys pretended to put something in his mouth, another mounted him from behind and humped him while he mimed throwing a lasso. The girls laughed and gave me the finger. As I rounded the corner the boy with the lasso dropped his trousers and showed his white arse.

1. All the Birds, Singing

Book Description Condition: Good. Ships from the UK. Former Library book. Shows some signs of wear, and may have some markings on the inside. Seller Inventory # GRP76764925

2. All the Birds, Singing

Book Description Condition: Good. Ships from the UK. Shows some signs of wear, and may have some markings on the inside. Seller Inventory # 14112120-6

3. All the Birds, Singing

4. All the Birds, Singing

5. All the Birds, Singing

Book Description Hardcover. Condition: Good. Ex library copy with usual stamps/stickers Good condition is defined as: a copy that has been read but remains in clean condition. All of the pages are intact and the cover is intact and the spine may show signs of wear. The book may have minor markings which are not specifically mentioned. Most items will be dispatched the same or the next working day. Seller Inventory # wbb0017047558

Shipping: US$ 11.46
From United Kingdom to U.S.A.
Destination, rates & speeds

6. All the Birds, Singing

Shipping: US$ 7.58
From United Kingdom to U.S.A.
Destination, rates & speeds

7. All the Birds, Singing

Book Description Paperback. Condition: Very Good. The book has been read, but is in excellent condition. Pages are intact and not marred by notes or highlighting. The spine remains undamaged. Seller Inventory # CIN000552181

8. All the Birds, Singing

Book Description Hardcover. Condition: Very Good. Item is in very good condition. If supplemental codes/CDs for textbooks are required please contact us prior to purchasing as they may be missing. Photos are stock pictures and not of the actual item. Seller Inventory # DS-0224096680-2

9. All the Birds, Singing Wyld, Evie

Shipping: US$ 28.99
From United Kingdom to U.S.A.
Destination, rates & speeds