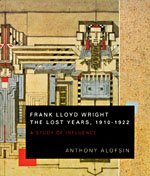 Frank Lloyd Wright: The Lost Years, 1910-1922 uncovers the real story of Wright's travels in Europe. By examining this elusive and influential period in Wright's development, Alofsin restores an important chapter to the history of modern architecture. Bringing new definition and insight to the story of Frank Lloyd Wright, this book has become a standard work on America's greatest architect.

"Alofsin has set out to explain the impact of European culture on Wright by integrating its artistic influence with the tumultuous events in his private life. . . . [He] succeeds in this ambitious goal."—Kevin Nute, Architects' Journal

"A convincing and well-documented case that these were in fact crucial and fruitful years in Wright's development as an architect. . . . Absorbing."—Catherine Maclay, San Jose Mercury News

"One of the best."—Robert Fulford, Toronto Globe and Mail

Anthony Alofsin is the Roland Gommel Roessner Centennial Professor of Architecture and professor of art and art history at the University of Texas at Austin. He is the author of When Buildings Speak: Architecture as Language in the Habsburg Empire and Its Aftermath, 1867-1933, and The Struggle for Modernism: Architecture, Landscape Architecture, and City Planning at Harvard. He is also editor of Frank Lloyd Wright: Europe and Beyond.