Items related to The Earth on Show: Fossils and the Poetics of Popular...

O'Connor, Ralph The Earth on Show: Fossils and the Poetics of Popular Science, 1802-1856 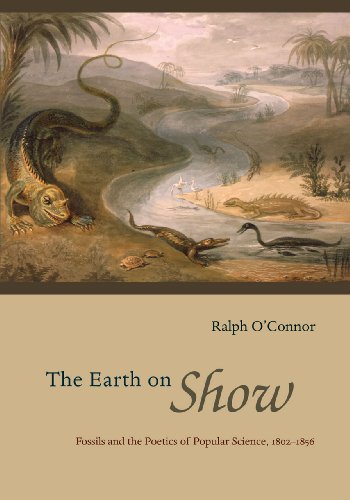 At the turn of the nineteenth century, geology—and its claims that the earth had a long and colorful prehuman history—was widely dismissedasdangerous nonsense. But just fifty years later, it was the most celebrated of Victorian sciences. Ralph O’Connor tracks the astonishing growth of geology’s prestige in Britain, exploring how a new geohistory far more alluring than the standard six days of Creation was assembled and sold to the wider Bible-reading public.

Shrewd science-writers, O’Connor shows, marketed spectacular visions of past worlds, piquing the public imagination with glimpses of man-eating mammoths, talking dinosaurs, and sea-dragons spawned by Satan himself. These authors—including men of science, women, clergymen, biblical literalists, hack writers, blackmailers, and prophets—borrowed freely from the Bible, modern poetry, and the urban entertainment industry, creating new forms of literature in order to transport their readers into a vanished and alien past.

In exploring the use of poetry and spectacle in the promotion of popular science, O’Connor proves that geology’s success owed much to the literary techniques of its authors. An innovative blend of the history of science, literary criticism, book history, and visual culture, The Earth on Show rethinks the relationship between science and literature in the nineteenth century.

Ralph O’Connor is professor in the literature and culture of Britain, Ireland, and Iceland at the University of Aberdeen.

“The portrait of the geological past to a public hungry for drama and instruction is explored with great verve by O’Connor. . . . One could argue that the awareness of deep time has changed human perception of our place in the cosmos more than any other discovery. Anyone interested in how such new ideas are promulgated at large will enjoy Ralph O’Connor’s work.”
(Richard A. Fortey Times Literary Supplement)