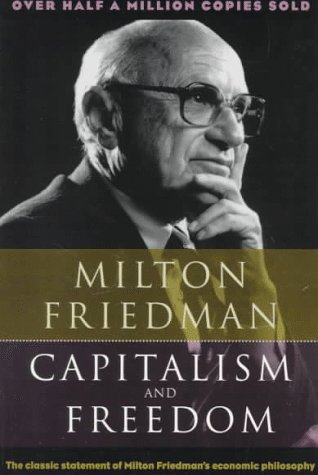 In the classic bestseller, Capitalism and Freedom, Milton Friedman presents his view of the proper role of competitive capitalism—the organization of economic activity through private enterprise operating in a free market—as both a device for achieving economic freedom and a necessary condition for political freedom. Beginning with a discussion of principles of a liberal society, Friedman applies them to such constantly pressing problems as monetary policy, discrimination, education, income distribution, welfare, and poverty.

"Milton Friedman is one of the nation's outstanding economists, distinguished for remarkable analytical powers and technical virtuosity. He is unfailingly enlightening, independent, courageous, penetrating, and above all, stimulating."-Henry Hazlitt, Newsweek

"It is a rare professor who greatly alters the thinking of his professional colleagues. It's an even rarer one who helps transform the world. Friedman has done both."-Stephen Chapman, Chicago Tribune

Milton Friedman (1912–2006) was an economist who taught at the University of Chicago for more than three decades. He was a recipient of the Nobel Memorial Prize in Economic Sciences, and is known for his research on consumption analysis, monetary history and theory, and the complexity of stabilization policy. He was a principal founder of what has come to be known as the Chicago School of Economics. He was a well-known public champion of laissez-faire capitalism. In 1962 the University of Chicago Press published Capitalism and Freedom, one of the most influential books of the twentieth century. In 1998 the Press published Two Lucky People, the memoir by Milton and Rose Friedman of their joint lives and work. In reviewing the book in the New York Times Book Review, David Brooks wrote: “This is a book that restores your faith in reasoned discourse.... There really are people who believe in scholarly exchange as a way to discover truth.”