Items related to Science, Money, and Politics: Political Triumph and... 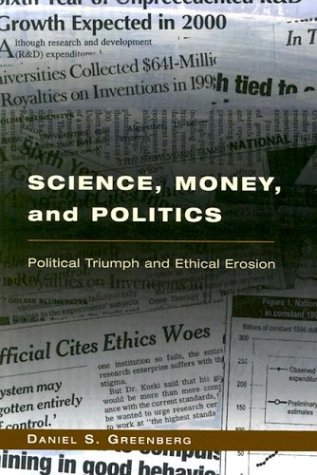 Each year, Congress appropriates billions of dollars for scientific research. In this book, veteran science reporter Daniel S. Greenberg takes us behind closed doors to show us who gets it, and why. What he reveals is startling: an overlooked world of false claims, pork, and cronyism, where science, money, and politics all manipulate one another.

Science, in the abstract, is supposed to be nonpolitical, even to transcend politics entirely. In truth, though, science is always conditioned by political reality--and by money.

So writes journalist Daniel Greenberg in this wide-ranging indictment of the way in which science is conducted in the United States. Although funding for scientific research has been readily available since the end of World War II, he maintains, research bureaucrats have transformed the enterprise into "a clever, well-financed claimant for money" and the successful quest for that funding into a condition of employment and advancement. Given that climate, Greenberg suggests, basic research has suffered, so that many diseases go unconquered, while more politically glamorous investigations are rewarded. Increasingly corporatized--industry, he writes, accounts for two-thirds of all research and development dollars spent, and its "profit-seeking values" are radiating throughout the culture--scientific research is insufficiently policed and criticized, watched over only by the inmates. In the rush for funding, Greenberg argues, science becomes increasingly subject to ethical lapses, with scientists too easily endorsing dubious causes such as the so-called Star Wars missile-defense system and too readily putting human subjects in danger.

Greenberg's arguments are broad but well supported, and his book is sure to excite controversy within the scientific community. Lay readers, however, will also find it of much interest. --Gregory McNamee

Each year, Congress appropriates billions of dollars for scientific research. And each year, scientists complain of insufficient funding and lobby (usually successfully) for more. Who receives the money, and the tactics they use to get it, are explored in this hard-hitting, meticulously documented exposé by veteran journalist Daniel S. Greenberg.

From the end of World War II to 2001, and from medical research to particle physics, Greenberg reveals the little-known but all-pervasive links among science, money, and politics in the United States. He takes us behind closed doors in Washington, drawing on archival research as well as astonishingly frank and revealing interviews with presidential science advisers, congressional and White House staffers, and elected officials.

Along the way we encounter some startling revelations. We learn about exaggerated claims of disease cures; how politicians supportive of medical research are rewarded with buildings named for them at the National Institutes of Health; why Ronald Reagan's science advisers remained silent, even though they knew that false claims were being made for a scientific breakthrough in the Star Wars missile-defense program; and how, even as research lagged in the expiring USSR, leading American scientists warned Congress of Soviet scientific superiority—and the need for increased U.S. science funding to counter it.

Thoroughly documented, engagingly written, and based on decades of investigative reporting, Science, Money, and Politics blows the whistle on the scientists, politicians, and government officials who sacrifice ethics—and science itself—for money.

Book Description The University of Chicago Press, United States, 2003. Paperback. Condition: New. 2nd ed. Language: English. Brand new Book. Each year, Congress appropriates billions of dollars for scientific research. In this book, veteran science reporter Donald S. Greenberg takes us behind closed doors to show us who gets the money, and why. What he reveals is startling: an overlooked world of false claims, pork, and cronyism, where science, money and politics all manipulate one another. Seller Inventory # BTE9780226306353