Items related to Beyond Monopoly: Lawyers, State Crises, and Professional... 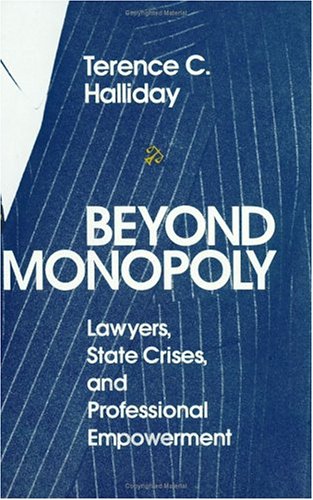 How do professional associations build their resources and establish authroity? What are the conditions under which professional expertise can be mobilized for political action? If professional organizations are endowed with a wealth of resources, do they use them responsibly or only for economic monopoly? What is the potential scope of professional action today?

In this pathbreaking study of the legal profession, Terence Halliday raises and addresses these questions combining extensive data from the rich archives o the Chicago Bar Association, one of the nation's largest and wealthiest bar organizations, with data from a national survey of bar legislative and judicial action. Beyond Monopoly demonstrates that the primary commitment of lawyers to economic monopoly has long been complemented by "civic professionalism" as the legal profession takes on more responsibility in the American democratic system when state capabilities diminish.

Through his examination of three types of state crises in the 1950s and 1960s—the challenges to legitimacy in the legal system, the crisis of individual rights during McCarthyism and the civil rights eras, and the fiscal crises of various state governments—Halliday shows that large bar associations can have extensive influence on any institution that is regulated by law. He argues that lawyers have the capability of turning social and political issues into technical legal matters in what he calls an "idiom of legalism." Under technical guise, lawyers come to exercise moral authority.

Halliday maintains that the American legal profession over the past century has gone from a formative stage, when controlling its market in the delivery of legal services was paramount, to an established phase in the past two decades, when it has committed extensive resources to the complex needs of the modern state. A de facto bargain has been struck: if the state leaves the profession's monopoly fairly intact, the profession can use its expert resources to help the state adapt to strain and crisis. It can do so not only in the legal system, where it has been championing "autonomous" law, but in other spheres as well—from the economy to the private sphere of individual rights.

Halliday confirms that the legal profession deploys its expertise not merely to attain professional dominance, to control a market, or to purvey an ideology, but to increase the viability of democratic institutions. Beyond Monopoly introduces a pioneering approach to a historical and comparative sociology of the professions that will be of vital interest not only to sociologists, but to political scientists and lawyers as well.

This book breaks new empirical ground and displays an unusual attention to significant theoretical issues in the sociology of professions. Halliday poses the very interesting question of the crisis of governance, the possibility that the state is overloaded with tasks and demands.

Terence C. Halliday is a research fellow and chair, executive committee on academic affairs, at the American Bar Foundation. He also lectures on sociology and politics in the College at the University of Chicago.