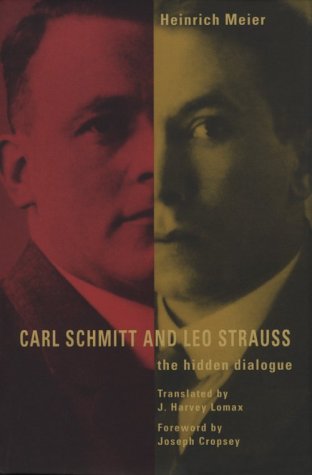 Carl Schmitt was the most famous and controversial defender of political theology in the twentieth century. But in his best-known work, The Concept of the Political, issued in 1927, 1932, and 1933, political considerations led him to conceal the dependence of his political theory on his faith in divine revelation. In 1932 Leo Strauss published a critical review of Concept that initiated an extremely subtle exchange between Schmitt and Strauss regarding Schmitt’s critique of liberalism. Although Schmitt never answered Strauss publicly, in the third edition of his book he changed a number of passages in response to Strauss’s criticisms. Now, in this elegant translation by J. Harvey Lomax, Heinrich Meier shows us what the remarkable dialogue between Schmitt and Strauss reveals about the development of these two seminal thinkers.

Meier contends that their exchange only ostensibly revolves around liberalism. At its heart, their “hidden dialogue” explores the fundamental conflict between political theology and political philosophy, between revelation and reason­and ultimately, the vital question of how human beings ought to live their lives.
“Heinrich Meier’s treatment of Schmitt’s writings is morally analytical without moralizing, a remarkable feat in view of Schmitt’s past. He wishes to understand what Schmitt was after rather than to dismiss him out of hand or bowdlerize his thoughts for contemporary political purposes.”—Mark Lilla, New York Review of Books

Heinrich Meier has served since 1985 as director of the Carl Friedrich von Siemens Foundation in Munich, where he also teaches philosophy. He is the author of several books, including the acclaimed critical edition of Rousseau’s Second Discourse.