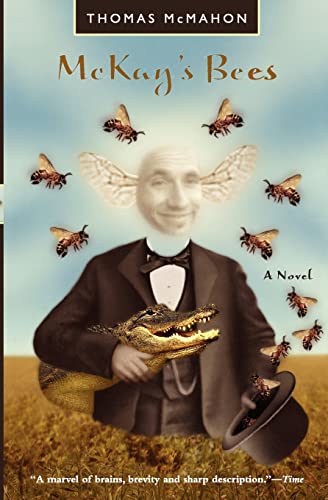 Moving from Massachusetts to Kansas in 1855 with his new wife and a group of German carpenters, Gordon McKay is dead set on making his fortune raising bees—undaunted by Missouri border ruffians, newly-minted Darwinism, or the unsettled politics of a country on the brink of civil war.

Thomas McMahon (1943 1999) was the Gordon McKay Professor of Applied Mechanics and professor of biology at Harvard University. He is the author of Loving Little Egypt and Principles of American Nuclear Chemistry, both published by the University of Chicago Press, as well as the posthumous novel, Ira Foxglove..

"A literary miracle--a tale defying gravity and all manner of other rules that ground the narratives of most storytellers."
(Douglas Bauer Boston Globe 2004-08-29)

"Humorous and generous yet sometimes disconcertingly fatalistic, McMahon's storytelling is based on an irresistible curiosity about how the world works.... His narratives are full of colorful background detail and impulsive detours; they're equally respectful of human dedication and nature's haphazard way of bestowing rewards and punishments. In keeping with this freewheeling spirit, McMahon has a style that manages to animate not only the people in a novel but its objects and landscapes."
(Alida Becker New York Times Book Review)

"[McMahon's novels] combine sophisticated scientific lore with a well-developed sense of human-ness. They are learned, funny, spiritual, and sexy. It would not be disgraceful to compare them with the work of Gabriel Garcia Marquez. Indeed, McMahon is a kind of Yankee magic realist, mixing the fantastic with the ordinary so seamlessly that one can't finally decided which is which--the search for nature's secrets and the search for love prove equally intoxicating. Written largely in a plain style--the prose soars only when a character is drunk on the pursuit of scientific truth--they are deceptively light, a cabinet of wonders and of spirit."
(Toronto Globe & Mail)

"McMahon, in such a short novel, should not have been able to bring coherence out of Darwin and Lincoln, bees and machines, East and West, honey and blood. . . . That he manages—that wit, irony, gentleness, passion, and knowledge conspire so successfully—is a wonder of craft." (John Leonard New York Times)

"Not one of the characters is a stereotypical scientist. Science itself informs the descriptions that run through the novel, and in this regard McMahon is at his most original."
(Edmund White New York Times Book Review)

"An impressively original novel. . . . McKay's Bees is comic in its vision, at the same time serious, constantly surprising in its twists of plot and its reflections upon life, by a writer with a voice uniquely his own."
(Edmund Fuller Wall Street Journal)

"[McMahon] is so much less well known than he deserves to be. His later novels, increasingly wry and exaggerated, bear a family resemblance to those of Kurt Vonnegut and to certain of Saul Bellow's works. Yet there is an underlying sweetness to McMahon's writing, a wholehearted engagement with those elements of scientific wonder that most resemble artistic creativity." (Amanda Schaffer Bookforum)

Book Description 2003. Condition: NEW. 9780226561110 This listing is a new book, a title currently in-print which we order directly and immediately from the publisher. For all enquiries, please contact Herb Tandree Philosophy Books directly - customer service is our primary goal. Seller Inventory # HTANDREE02137960