Items related to The Mahabharata: A Shortened Modern Prose Version of...

The Mahabharata: A Shortened Modern Prose Version of the Indian Epic 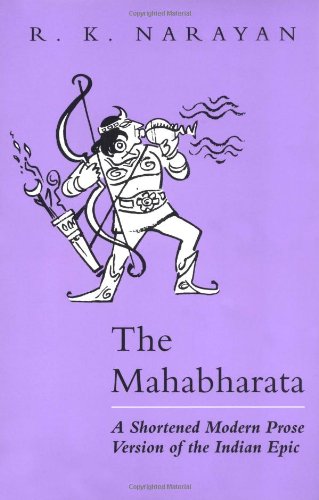 Growing from an oral tradition of ballads based on historic events in India, the Mahabharata was passed down and extended through the centuries, becoming the longest poem ever written. R. K. Narayan provides a superb rendition in an abbreviated and elegant retelling of this great epic.

The Mahabharata, together with the other great Sanskrit epic, the Ramayana, embodies much of the cultural and religious heritage of India. Based on the narrative of the great war between the Kauravas and the Pandavas, it tells of warriors, kings, saints, and goddesses caught up in the romance and drama of family intrigue. With its diversity of plots and themes-including the philosophical teachings of the Bhagavada Gita-the Mahabharata has entertained and influenced Indian audiences for nearly two thousand years. R. K. Narayan's abbreviated prose version provides a superb and elegant rendition of this great epic.

R. K. Narayan is one of the most prominent Indian novelists of the twentieth century. Born in 1906, Narayan was the recipient of the National Prize of the Indian Literary Academy, India's highest literary honor. His numerous works Mr. Sampath-The Printer of Malgudi, Swami and Friends, Waiting for Mahatma, and Gods, Demons and Others, all published by the University of Chicago Press.

1. The Mahabharata: A Shortened Modern Prose Version of the Indian Epic

2. The Mahabharata: A Shortened Modern Prose Version of the Indian Epic

3. THE MAHABHARATA: A SHORTENED MOD