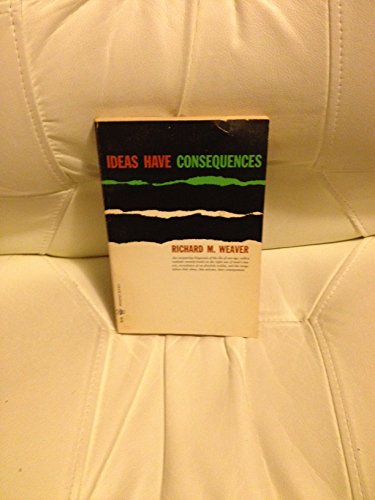 Richard M. Weaver (1910-1963) taught English at the University of Chicago and was a frequent contributor to Sewanee Review, Poetry, and Commonweal. He is also the author of The Ethics of Rhetoric, Rhetoric and Composition, and The Southern Tradition at Bay.

''Brilliantly written, daring and radical...It will shock, and philosophical shock is the beginning of wisdom.'' --Paul Tillich, theologian and existentialist philosopher

''This deeply prophetic book not only launched the renaissance of political conservatism in this country, but in the process gave us an armory of insights into the diseases besetting the national community that is as timely today as when it first appeared. Ideas Have Consequences is one of the few authentic classics in the American political tradition.'' --Robert Nisbet, sociologist

''A historical, social, and moral examination of the modern world facing disorder and disintegration...A thoughtful, disturbed, and disturbing analysis, which cannot be taken lightly.'' --Kirkus Reviews

''First and foremost a book about the dissolution of the West...The prose exudes a wonderful anger. Not the defensive anger of the street fighter. Rather, the stuff of muses.'' --IntellectualConservative.com