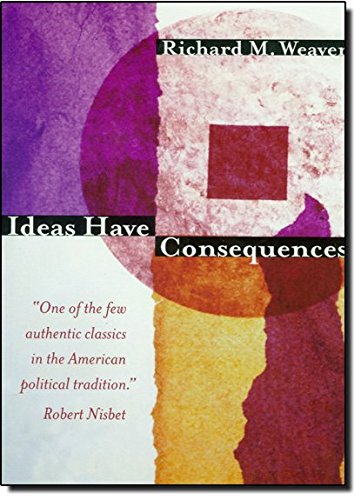 In what has become a classic work, Richard M. Weaver unsparingly diagnoses the ills of our age and offers a realistic remedy. He asserts that the world is intelligible, and that man is free. The catastrophes of our age are the product not of necessity but of unintelligent choice. A cure, he submits, is possible. It lies in the right use of man's reason, in the renewed acceptance of an absolute reality, and in the recognition that ideas—like actions—have consequences.

Richard M. Weaver (1910–63) was an American scholar, revered twentieth-century conservative, and professor of English and rhetoric at the University of Chicago. He is the author of several books, including The Ethics of Rhetoric and Visions of Order: The Cultural Crisis of Our Time.

“A profound diagnosis of the sickness of our culture.”
(Reinhold Niebuhr)

“Brilliantly written, daring, and radical. . . . it will shock, and philosophical shock is the beginning of wisdom.”

“Richard M. Weaver’s book is important; his explanation of the breakdown of modern man is the best in years.”
(John Crowe Ransom)

“This deeply prophetic book not only launched the renaissance of philosophical conservatism in this country, but in the process gave us an armory of insights into the diseases besetting the national community that is as timely today as when it first appeared. Ideas Have Consequences is one of the few authentic classics in the American political tradition.”
(Robert Nisbet)