Items related to Critical Turning Points in the Middle East: 1915 -... 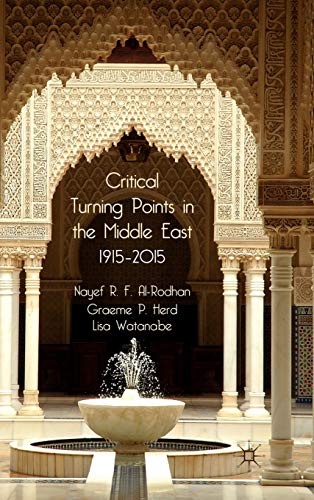 This book takes a novel look at the modern Middle East through the prisms of six cascading negative critical turning points. It identifies the seeds of a potential seventh in the collective dignity deficits generated by poor governance paradigms and exacerbated by geopolitical competition for the region's natural resources.

NAYEF R.F. AL-RODHAN is Senior Member of St. Antony's College, University of Oxford, UK. He is also Senior Fellow and Director of the Center for the Geopolitics of Globalization and Transnational Security at the Geneva Center for Security Policy, Geneva, Switzerland. He is a philosopher, neuroscientist, and geostrategist. A prize-winning scholar, he has published 21 books proposing many innovative concepts and theories in global politics and security. He was educated at Yale University, the Mayo Clinic and Harvard University. He is best known for several philosophical and analytic books on global politics that include: The Role of the Arab-Islamic World in the Rise of the West; Meta-Geopolitics of Outer Space; Sustainable History and the Dignity of Man; Emotional Amoral Egoism; Neo-Statecraft and Meta-Geopolitics; The Politics of Emerging Strategic Technologies and Symbiotic Realism.

GRAEME P. HERD is Head of the International Security Program and Co-Director of the International Training Course in Security Policy (ITC) at the Geneva Center for Security Policy (GCSP), Switzerland. His recent books include Great Powers and Global Stability in the 21st Century (edited) and The Ideological War on Terror: World Wide Strategies for Counter Terrorism (edited with Anne Aldis).

LISA WATANABE is Research Officer for the Program on the Geopolitical Implications of Globalization and Transnational Security at the Geneva Centre for Security Policy (GCSP), Switzerland. She is the author of Securing Europe: European Security in an American Epoch.

"This is a thoughtful and thought-provoking study that makes evident the history behind the current situation. The study concludes with a set of recommendations designed to promote stability and security."

"This book offers a unique way of looking at the events that have transpired in the Middle East over the past century. Interpreting events through the prism of good governance and dignity deficits offers the reader a chance to see how the same moment in time can be viewed by different audiences with sometimes tragic consequences. The authors' ability to use these past events as a way to shape future policies in and toward the region are most insightful."

"[This book] provide a remarkably balanced and insightful picture of the forces that have driven the Arab world over the past Century. Unlike so many other studies, it explains events from an Arab perspective [...] and the critical impact of the Arab-Israeli conflict without choosing sides. The final section on "dignity deficits" makes it clear that the fact the underlying forces involved are not driven by problem in Islam or by some "clash between civilizations," and provides realistic and balanced priorities for dealing with problems that the Arab world must now solve to move forward."

"At long last a book on the Middle East which is free from the usual Western stereotypes of Arabs and Muslims [...] The result is a thoughtful and thought-provoking book on an eventual century in Middle Eastern history."