Items related to Race-Baiter: How the Media Wields Dangerous Words to...

Deggans, Eric Race-Baiter: How the Media Wields Dangerous Words to Divide a Nation

Race-Baiter: How the Media Wields Dangerous Words to Divide a Nation 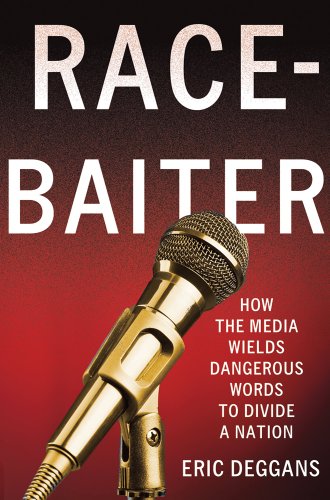 Gone is the era of Edward R. Murrow and Walter Cronkite, when news programs fought to gain the trust and respect of a wide spectrum of American viewers. Today, the fastest-growing news programs and media platforms are fighting hard for increasingly narrow segments of the public and playing on old prejudices and deep-rooted fears, coloring the conversation in the blogosphere and the cable news chatter to distract from the true issues at stake. Using the same tactics once used to mobilize political parties and committed voters, they send their fans coded messages and demonize opposing groups, in the process securing valuable audience share and website traffic. Race-baiter is a term born out of this tumultuous climate, coined by the conservative media to describe a person who uses racial tensions to arouse the passion and ire of a particular demographic. Even as the election of the first black president forces us all to reevaluate how we think about race, gender, culture, and class lines, some areas of modern media are working hard to push the same old buttons of conflict and division for new purposes. In Race-Baiter, veteran journalist and media critic Eric Deggans dissects the powerful ways modern media feeds fears, prejudices, and hate, while also tracing the history of the word and its consequences, intended or otherwise.

The story of how I came to write my first book, Race-Baiter, also outlines why the book is so necessary, and how its lessons can help legions of consumers cut through the toxic messages clogging modern media.

I was searching through my email one evening years ago, when I stumbled on a message from a reader I'd never met.

"Any idea why Bill O'Reilly called you a racist hate monger tonight?" he wrote. "Congratulations!"

To be honest, I wasn't that surprised. Ever since I criticized the Fox News Channel star for using code words and unfair tactics to demonize black rappers in a 2002 prime time special, O'Reilly had always reserved a special bit of televised bile for me.

After I dropped a column in the St. Petersburg Times newspaper highlighting the racially-charged language he used in describing Hurricane Katrina victims, he'd called me "a dishonest, racially motivated correspondent writing for perhaps the worst newspaper in the country." And this latest attack, aired as part of O'Reilly's Talking Points Memo segment on April 7, 2008, was no different.

"One of the biggest race baiters in the country writes for the St. Petersburg Times newspaper," he thundered to an audience of millions. "Eric Deggans also serves as the chairman of the Black Journalist Media Monitoring Committee. Deggans takes delight in branding people racist. Senator Joseph McCarthy would love this guy."

Besides getting the name of my group wrong - it's the National Association of Black Journalists, a group which has advocated for accurate news coverage of African Americans since the mid-1970s - O'Reilly revealed a time-honored tradition in his response to my work.

Bullies such as O'Reilly often try to silence those who criticize their clumsy words on race by accusing the critics themselves of racism.

What really stood out here was his larger message; that people in his audience -- largely, older, middle class and white - could trust him to cut through the clutter of talk about racial oppression in America.

In O'Reilly's world, this outrage only works one way; his outrage was focused only on allegedly unfair accusations of racism against white people.

He had no words or sympathy for when people of color might balk at seeing then-Fox News colleague Glenn Beck accuse the nation's first black president of having a "deep-seated hatred of white people" or radio pundit Rush Limbaugh might laugh at a parody song he created called "Barack the Magic Negro."

O'Reilly's true goal: drawing his audience closer to him by leveraging his own unfair accusations of racism and prejudice. Even as the nation was preparing to elect its first black president, the Fox News anchor was taking advantage of any feelings his audience might have of discomfort and fear to encourage viewers bond with him by rejecting those who might talk about racial oppression.

This is, in part, how O'Reilly has become the most-watched host on cable TV news; a towering figure who often scores high in viewer polls listing America's most influential journalists, despite the fact that he isn't a journalist and twists facts like taffy to serve his purposes.

And anyone who opposed his efforts was likely to be slapped with a term whose pejorative power shuts down all debate: race baiter.

Flash forward a few years, and you see that tactic spread across an entire chunk of major media outlets.

Once upon a time, media outlets earned revenue by gathering the biggest crowds, selling advertisers access to them. But in today's fragmented media environment, many of the fastest-growing platforms pursue the biggest pieces of that audience - I call it the Tyranny of the Broad Niche - and they have found leveraging prejudice and stereotypes effective in drawing audience.

My book, Race-Baiter, offers a handy road map to decoding these tactics and defusing them. The topics include: Fox News' use of scary black people to motivate viewers; the history of how corporations turned angry white men on radio into a moneymaking formula; the uneasy questions raised by activist Al Sharpton's dual role as MSNBC anchor and advocate for the family of slain teen Trayvon Martin; the way a lack of poverty coverage has allowed politicians to demonize the poor for under-informed audiences.

In a tribute to how far we have already come on these discussions, it is generally accepted that mainstream society rejects outright racism and prejudice. Which means the best way to defeat such techniques in modern media is simply to expose them; drag implicit messages meant to work on the edges of your mind into the light, as explicit themes the audience must consciously accept or reject.

Of course, by doing that, you risk being accused of bringing up stereotypes and prejudice unfairly.

You risk being called a race baiter.

But sometimes, having that title hung on you by the right people means mostly one thing: You're on the right track.

Eric Deggans is TV and Media Critic for National Public Radio and formerly for the Tampa Bay Times, Florida's largest newspaper. He also contributes to CNN.com and the Huffington Post. Deggans regularly appears as a pundit/expert on MSNBC's "Countdown"; CNN's "Reliable Sources"; Fox News Channel's "Fox and Friends" morning show and "Hannity and Colmes"; PBS's "The NewsHour"; CNN Headline News' "Showbiz Tonight"; "The Tavis Smiley Show" on Black Entertainment Television; and the PBS shows "Livelyhood" and "The Calling." His work has also appeared in a host of newspapers and magazines ranging from the conservative Newsmax magazine to the Chicago Tribune, Seattle Times, Chicago Sun-Times, Detroit News and Miami Herald, VIBE magazine, Hispanic magazine and Ebony magazine.

1. Race-Baiter: How the Media Wields Dangerous Words to Divide a Nation

2. Race-Baiter: How the Media Wields Dangerous Words to Divide a Nation (Hardback or Cased Book)

3. Race-Baiter : How the Media Wields Dangerous Words to Divide a Nation

4. Race-Baiter: How the Media Wields Dangerous Words to Divide a Nation

5. Race-Baiter: How the Media Wields Dangerous Words to Divide a Nation

7. Race-Baiter: How the Media Wields Dangerous Words to Divide a Nation

8. Race-Baiter: How the Media Wields Dangerous Words to Divide a Nation

9. Race-Baiter: How the Media Wields Dangerous Words to Divide a Nation