Items related to The History of Havana (Palgrave Essential Histories... 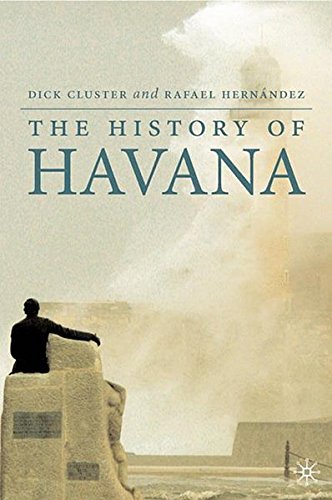 This is the first comprehensive history of the culturally diverse city, and the first to be co-authored by a Cuban and an American. Beginning with the founding of Havana in 1519, Cluster and Hernández explore the making of the city and its people through revolutions, art, economic development and the interplay of diverse societies. The authors bring together conflicting images of a city that melds cultures and influences to create an identity that is distinctly Cuban.

Dick Cluster is the author of the novels Return to Sender, Repulse Monkey, and Obligations of the Bone. He landed in Havana's José Martí airport for the first time in 1969 and has been fascinated by the city ever since, exploring it by foot, bicycle, city bus, tour bus, camel bus, car, and other means. He is a translator of Cuban literature and teaches courses on Cuban history, culture, and politics at the University of Massachusetts at Boston, as well as interdisciplinary courses in other fields. Previous nonfiction books include They Should Have That Cup of Coffee, about U.S. radical movements of the '60s and '70s, and Shrinking Dollars, Vanishing Jobs, about the U.S. economy.
Rafael Hernández is the editor of Temas, a Cuban quarterly in the field of history, culture, economics, and politics. Graduated from the University of Havana with a degree in French literature, and from the Colegio de Mexico in political science, since the 1970s he has researched and written about Cuban culture, society, history, and politics, Cuba-U.S. relations, and images of Cuba in the U.S. He has oriented, guided, and taught many American visitors to Cuba, whether students, academics, or travelers, been visiting professor and researcher at Columbia, Harvard, Johns Hopkins, the Woodrow Wilson Center, Tulane, and the University of Puerto Rico, and lectured at numerous other schools and academic conferences. His publications include three books of poetry and ten books of essays (his own and edited collections) published in Cuba, Mexico and the US. His essay collection Looking at Cuba won the Cuban Critics Award in 2000, and was published by the University Press of Florida in 2003.

The book is eminently readable and succeeds in providing an accessible introduction to the city’s history. . . The authors highlight dramatic moments in the narrative such as the 1762 British invasion or the 1844 Escalera rebellion, while featuring vignettes of colorful characters that provide a sense of the city’s sensibility. . . An introductory primer to Havana’s history that should pique the interests of undergraduates or a popular readership. Cluster and Hernández provide a balanced account that largely avoids the traps of ideological fervor still too often associated with all things Cuban.--Hispanic American Historical Review

"Serious and easily readable. History of Havana employs conventional documentary, written and visual sources and a variety of testimonials from throughout the world to bring to life the complex portraits and challenges of contemporary Havana -- a historical crossroad of the New World, a stage of scenic architecture, rhythmic sound-scapes, remarkable artistic genius, foreign invasions, struggles for personal and national freedom and independence--today a vibrant, complex world-renowned city, in a new global moment, creating its future in the throes of the fall of the Soviet Union, the lure and hooks of tourism, natural disasters, and the challenges of Empire." --Harry Belafonte, Singer, Actor, UNICEF Goodwill Ambassador "What a wonderful read! Dick Cluster and Rafael Hernandez' stories read like late night conversations on a dark, humid Havana terrace: marvelous, sly and frequently incredible. And that's the real kick, because they're meticulously researched, smoothly well-chosen and arranged. This is a history that feels more like literature: palpable, personal, full of secrets revealed and the occasional, and necessary, melancholia." --Achy Obejas, author of Days of Awe "Gorgeous, feisty, savvy, cosmopolitan, sexy, defiant and yes, at times decadent and decaying, yet always resilient and ribald, battered repeatedly but never beaten--the city of Havana, where everyone deserves to have been born, is the star of this loving, gritty history. The authors lead the reader from Columbus’ stumbling into Cuba in his quest for the Orient in the fifteenth century to our own decade. They tell the story of Havana’s people, their physical space, their welcoming and unwelcome encounters with foreigners, and their capacity for re-invention. It’s a great read." --Jorge I. Domínguez, Clarence Dillon Professor of International Affairs, Harvard University  "This riveting and highly readable historical document is bittersweet.  'Bitter' in that throughout the history of Havana, weather, wars, and economic strangulation have forced this great city to periodically deteriorate.  'Sweet' in the seemingly infinite optimism and sense of humor of its citizens and even sweeter because the city will rise again and reclaim its proper place amongst the great urban centers of the world." --James Stewart Polshek, Architect of The Rose Center for Earth and Space at the American Museum of Natural History "History of Havana by Rafael Hernández and Dick Cluster invites general readers to enter and experience modern-day Havana as the product of its past. They will find a city whose citizens developed and changed in moments of revelry and times of crisis, responding to local history and world history, and making history as well. This diverse population negotiated when possible, fought when required, and sought to imagine and sustain revolutionary visions and life-ways of new men and women." --Danny Glover, Actor and Activist "This colorful work explains the singular allure of Havana . . . What makes it compelling is how effectively Cluster and Hernandez convey the personality of the city." --Chicago Sun-Times "In fine prose, with academic rigor, clarity that shows respect for the reader, and a good dose of lyricism, the co-authors serve us up the trajectory of the Cuban capital." --Diario Las Americas "This is a very good book...a rich and readable social and cultural history, which incorporates popular culture--film and radio, dance music and popular religion--to weave a historical tapestry as beguiling as a Havana night."--History Book Club "This beautifully written, reliably informative, and extremely sensitive account provides a delightful examination across time of the extraordinary human dimensions of an extraordinary people." --F. W. Knight, Choice  "One of the few books in English to cover the history of the Cuban capital specifically, it provides a history of Cuba too. This engaging, people-centered account takes a social and cultural perspective as much as an economic and political one and is peppered with lively personal testimonies helping to make the facts of the past more pertinent and more real."--2007 Rough Guide to Cuba