Items related to Collusion Across the Jordan: King Abdullah, the Zionist...

Shlaim, Avi Collusion Across the Jordan: King Abdullah, the Zionist Movement, and the Partition of Palestine

Collusion Across the Jordan: King Abdullah, the Zionist Movement, and the Partition of Palestine 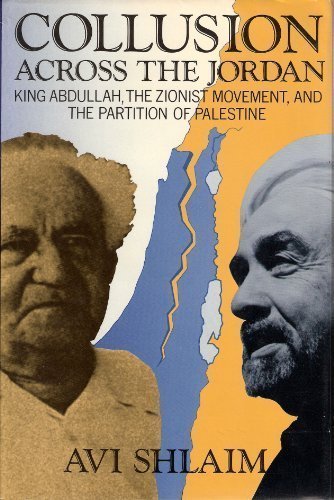 This controversial piece of investigative scholarship is a blockbuster. Shlaim, an Oxford instructor in international relations, documents that Jordan's ambitious, absolutist King Abdullah, who was assassinated in 1951, had clandestine ties with the Zionist movement in Israelan accusation that many of the ruler's cohorts have made in the past. To further his own aims of creating a greater Jordanian empire, Abdullah conducted secret diplomacy with David Ben-Gurion, Golda Meir and other Israeli leaders. Drawing on Israeli government archives as well as interviews with politicians, soldiers and intelligence agents, Shlaim argues that the king's self-serving maneuvers hastened the partition of Palestine, which left more than a million Palestinian Arabs without a homeland. His absorbing 686-page narrative, a major reevaluation of the Arab-Israeli conflict, unfolds an Arab world torn by internal rivalrynot the monolithic, hostile bloc that some Israelis claim it to be.
Copyright 1988 Reed Business Information, Inc.

1. Collusion Across the Jordan: King Abdullah, the Zionist Movement, and the Partition of Palestine