Items related to Projections of War: Hollywood, American Culture, and... 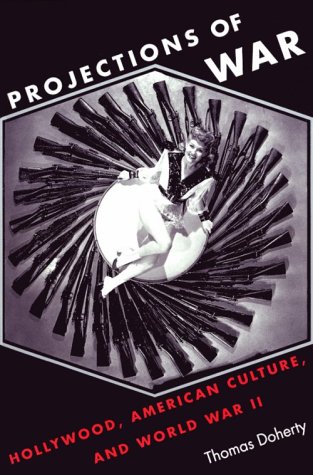 In this lively cultural history, Doherty demonstrates that wartime Hollywood was not a rigidly controlled propaganda machine, as is often assumed, but an ad-hoc collaborative effort between the government and film industry.

Thomas Doherty is assistant professor of American Studies at Brandeis University. He is author of Teenagers and Teenpics: The Juvenilizatzion of American Movies in the 1950s and associate editor of the film journal Cineaste.

More than any other event, WW II transformed the relationship between Hollywood and American culture, Doherty (American Studies/Brandeis) announces at the outset of this uncommonly wide-ranging social history--and proceeds to support his argument with surprising success. Before the war, argues Doherty (Teenagers and Teenpics, 1988--not reviewed), the contract between Hollywood and its audience stipulated a myth of ``pure entertainment'' in which formulaic genres and happy endings reigned supreme. But the contradictory imperatives posed by the war--Hollywood features for the audience back home had to be upliftingly escapist yet honest in their acknowledgment of wartime stresses; film coverage of combat had to be unflinching yet supportive; presentations of women had to emphasize their success in adapting their femininity to heretofore masculine tasks--rewrote that contract in a profoundly equivocal way. With the help of extensive research in studio archives and dozens of illustrative anecdotes, Doherty is especially incisive in showing the transition from the pacifism universally prescribed for WW I movies to the gung-ho partisanship for WW II. He also excels in using Hollywood movies as cloudy mirrors for such social problems as racial injustice, Japanese internship, and the ``properly directed hatred'' that called for fine calculations in distinguishing shifting degrees of hostility toward Germans, Italians, and Japanese as the prewar Hollywood ``tradition of quality''--exemplified by David Selznick's literary adaptations--inched toward the postwar ``issue-oriented stance of Walter Wanger, Stanley Kramer, and Dore Schary.'' Despite the occasional minor blemish (Herblock, not Bill Mauldin, is identified as the creator of cartoon dogfaces Willie and Joe), the scholarship is both sound and unobtrusive. Though Doherty occasionally loses sight of his largest argument in the middle of detailing Jimmy Stewart's war record, this is a model social history of war movies--both a penetrating examination of Hollywood at war and a bracing argument about the effects of the war on the nature of Hollywood entertainment. (Seventy photographs) -- Copyright ©1993, Kirkus Associates, LP. All rights reserved.