Items related to China's Road to the Korean War

China's Road to the Korean War 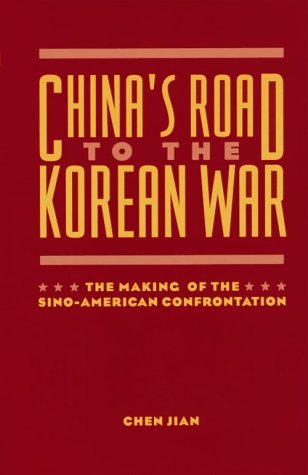 Why did China enter the Korean War? What made Mao Zedong, only one year after the establishment of the People's Republic of China, decide to assist North Korea in fighting a coalition of nearly all of the Western industrial powers? Many scholars have traditionally regarded Beijing's decision to enter the war as a reaction to Washington's mistake in crossing the 38th Parallel and marching towards the Yalu. Based on extensive use of newly available Chinese sources, however, this study argues that China's entry into the Korean War was brought about by concerns much more complex than simply safeguarding the Chinese-Korean border. The author places the making of the Sino-American collision in Korea in the broader context of both the continuous development of the Chinese Communist Revolution after its nationwide victory and the emerging Cold War. He provides a fresh analytical framework within which to understand the foreign policy and security strategy of the People's Republic of China.

Chen Jian is Professor of the History of US-China Relations at Cornell University.

Brings an exciting new dimension to our understanding of why China entered the Korean War. This highly readable work challenges many basic assumptions about how Mao Zedong and his contemporaries saw world politics and set Chinese foreign policy along a revolutionary path. It has important implications for understanding Sino-American conflict not just in the early 1950s but throughout the Cold War era. -- Review

1. China's Road to the Korean War

Book Description Columbia University Press, 1995. Hardcover. Condition: GOOD. Has little wear to the cover and pages. Contains some markings such as highlighting and writing. Supplemental materials are not guaranteed with any used book purchases. Seller Inventory # 0231100248_abe_gd

2. China's Road to the Korean War

Book Description Columbia University Press, 1995. Condition: Good. A+ Customer service! Satisfaction Guaranteed! Book is in Used-Good condition. Pages and cover are clean and intact. Used items may not include supplementary materials such as CDs or access codes. May show signs of minor shelf wear and contain limited notes and highlighting. Seller Inventory # 0231100248-2-4

3. China's Road to the Korean War: The Making of the Sino-American Confrontation

Book Description Columbia Univ Pr 1994-12-01, 1994. Hardcover. Condition: Good. Item is in good condition. Some moderate creases and wear. This item may not come with CDs or additional parts including access codes for textbooks. Might be an ex-library copy and contain writing/highlighting. Seller Inventory # DS-0231100248-3

4. China's Road to the Korean War

Book Description Columbia University Press, 1995. Hardcover. Condition: VERY GOOD. Pages are intact and are not marred by notes or highlighting, but may contain a neat previous owner name. The spine remains undamaged. Supplemental materials are not guaranteed with any used book purchases. Seller Inventory # 0231100248_abe_vg

5. China's Road to the Korean War

6. China's Road to the Korean War