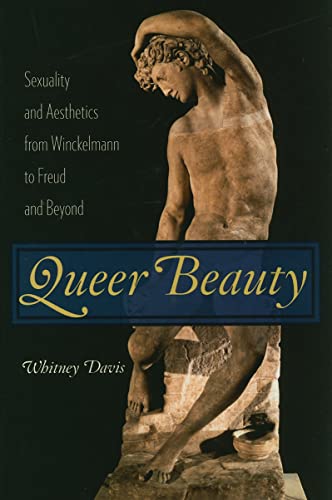 The pioneering work of Johann Winckelmann (1717-1768) identified a homoerotic appreciation of male beauty in classical Greek sculpture, a fascination that had endured in Western art since the Greeks. Yet after Winckelmann, the value (even the possibility) of art's queer beauty was often denied. Several theorists, notably the philosopher Immanuel Kant, broke sexual attraction and aesthetic appreciation into separate or dueling domains. In turn, sexual desire and aesthetic pleasure had to be profoundly rethought by later writers.

Whitney Davis follows how such innovative thinkers as John Addington Symonds, Michel Foucault, and Richard Wollheim rejoined these two domains, reclaiming earlier insights about the mutual implication of sexuality and aesthetics. Addressing texts by Arthur Schopenhauer, Charles Darwin, Oscar Wilde, Vernon Lee, and Sigmund Freud, among many others, Davis criticizes modern approaches, such as Kantian idealism, Darwinism, psychoanalysis, and analytic aesthetics, for either reducing aesthetics to a question of sexuality or for removing sexuality from the aesthetic field altogether. Despite these schematic reductions, sexuality always returns to aesthetics, and aesthetic considerations always recur in sexuality. Davis particularly emphasizes the way in which philosophies of art since the late eighteenth century have responded to nonstandard sexuality, especially homoeroticism, and how theories of nonstandard sexuality have drawn on aesthetics in significant ways.

Many imaginative and penetrating critics have wrestled productively, though often inconclusively and "against themselves," with the aesthetic making of sexual life and new forms of art made from reconstituted sexualities. Through a critique that confronts history, philosophy, science, psychology, and dominant theories of art and sexuality, Davis challenges privileged types of sexual and aesthetic creation imagined in modern culture-and assumed today.

Excerpt from: Introduction: Sexuality and Aesthetics from Winckelmann to Freud and Beyond

1. In Drawing the Dream of the Wolves, published in 1996, I examined the visual evidence for the sexuality that had emerged between Sigmund Freud and his patient, Serge Pankejeff (known as der Wolfsmann, the Wolf Man), in a psychoanalysis that Freud conducted between 1910 and 1914. Like any human interaction, this encounter involved the exchange of many images: we learn to see the world as others see it by learning to understand their pictorial worlds, and therefore, as I argued in Replications, also published in 1996, we must all be -- we must try to become -- the historians of one another's image making. Freud's analysis of the Wolf Man also involved the exchange of many artifacts; they included an ancient Egyptian figurine that the Wolf Man gave to Freud (see chapter 2) and a strange drawing he was said to have made for Freud in order to depict a traumatic childhood dream image that represented his early sexual history (or so Freud believed; see chapter 8). Published in 1919, Freud's interpretation of the Wolf Man, Aus der Geschichte einer infantilen Neurose ("From the History of an Infantile Neurosis"), has rarely been cited by psychoanalysts or art historians who have written specifically on psychoanalysis and art or on psychoanalytic aesthetics. But it remains the best demonstration of Freud's approach to images (what I call fantasmatic iconicity in chapter 10) and to representations, such as pictures, that attempt to relay them in public media.

In 1996 Michael Kelly asked me to write the entry on sexuality for The Encyclopedia of Aesthetics to be published by Oxford University Press. Kelly's request forced me to think in broad terms about the relations between sexuality and aesthetics that had issued in the psychoanalytic theory of art, especially in Freud's essay on Leonardo da Vinci (a text, published in 1910, that complemented Freud's analysis of the Wolf Man) and in contemporary Freudianism (for example, in the writing of Freud's disciple Oskar Pfister, whose claims about the composition of one of Leonardo's paintings were incorporated into later editions of Freud's essay on Leonardo; see chapters 7 and 8).

But psychoanalysis has not been the only site of intersection between formal or philosophical aesthetics on the one side and notions of sexuality and human eroticism on the other. In the ten chapters in this book, I assign equal importance to the traditions of Kantian and Hegelian idealism in the late eighteenth century and early nineteenth century (chapters 1, 3, and 4) and to the findings of Darwinism in the mid-nineteenth century (chapters 5 and 6), well before the rise of psychoanalysis in the late 1890s. In addition, I also address pre- and non-Freudian sexual anthropologies that Freud rewrote for his own purposes (chapters 2, 7, and 8). And, after the worldwide spread of psychoanalysis in the 1920s and 1930s, the claims of existential psychiatry (they shaped the early work and thought of Michel Foucault) and the tools of analytic philosophy (adopted in part by Richard Wollheim) have a significant place in my story (chapters 9 and 10). Indeed, an appropriately broad sense of the relations between sexuality and aesthetics (one that attends to critical idealism, modern biology, and perceptual psychology as well as to psychoanalysis) enables a critique of psychoanalysis.

One lesson I draw from the research presented in this book is that we cannot reduce aesthetics to sexuality, as psychoanalysis tends to do. Sexuality often requires analysis in terms of aesthetics. Originally, in fact, Freud's psychoanalysis was a theory of animal perception, of aisthesis in its basic and enduring etymological sense. To be sure, Freud concluded that specifically sexual perception -- our imagistic awareness of erotic objects -- should be dated, at least in part, to the past life of the percipient rather than (or in addition to) his or her immediate sensory awareness of a proximate environment, even if (and especially because) that ambient world contains sexually gratifying opportunities or sexually stimulating objects, some of which might be images or works of art. The lifelong history of sexual aisthesis in human beings became Freud's topic in the early 1900s, especially in the period between the publication of his Three Essays on the Theory of Sexuality in 1905 and the completion of Leonardo da Vinci and a Memory of His Childhood in 1910 (see chapters 7 and 8). But, as Freud pursued it, this project introduced a division between sexual aisthesis and the aisthesis of art -- between sexual attraction and aesthetic judgment in the usual colloquial senses of those terms. More exactly, Freud worked out a theoretical language (indeed, a theory of sexuality) to reaffirm a division that had long been accepted already. Aesthetic judgment in the usual sense had typically been associated with a person's mature judgments of taste in the context of his or her immediate present-day encounters with objects in nature and with works of art. And sexual aisthesis had typically been defined as a merely preliminary stage in the canonical teleology of such judgments, especially in relation to the "perfected ideals" supposedly projected in normatively beautiful works of art (see chapter 1). In Kant's Critique of the Power of Judgment and in the Kantian tradition, in fact, the erotic attractiveness of natural objects (or their figuration in works of art) had been defined as a kind of human interest that must be entirely superseded in order for a truly disinterested aesthetic judgment to emerge. Of course, several later nineteenth-century utilitarian, evolutionist, and physiological accounts of the "sense of beauty" (proposed by Herbert Spencer, Charles Darwin, Grant Allen, and other writers) tried to reattach sexual-aesthetic and aesthetic-artistic interests -- to show, that is, that sexual aisthesis and artistic aisthesis remain naturally continuous states of the human organism in a particular state or states of irritation and arousal, perhaps even identical states in certain well-defined respects (see chapter 6). But the damage was done; the theory of sexuality and the philosophy of art had already drifted apart. In this convoluted conceptual context it was not surprising, in turn, that Freud's model of sexuality (precisely because it was critical of then-customary doctrines) installed aesthetic interest and judgment at the very heart of erotic and sexual history at the same time that it installed erotic interest and activity (in an equally innovative way) at the heart of aesthetic experience and artistic appreciation.

The copula in my title, then, is crucial. It denotes not only the separation or splitting of sexuality and aesthetics. It also denotes their intersection, recursion, and interdependence -- the fact that between 1750 (if not earlier) and about 1920 (if not later) the concepts could not be fully cleaved apart. For some fundamental purposes, in fact, they had to be treated as mapping the same topography, though perhaps in different ways or from different vantages. If the terms were not too cumbersome, sexual aesthetics and aesthetic sexuality might best denote my object here.

2. In several chapters, including the chapter that has given an overall title to this book, I have placed a good deal of emphasis on intersections between aesthetics and specifically homoerotic or homosexual approaches to sexuality, experiences in sexuality, or histories of sexuality. I emphasize homoerotic or homosexual sexual aesthetics or aesthetic sexuality. I am well aware that this focus is overdetermined. But it is not, I believe, unwarranted. Some of Freud's most productive ideas about sexuality and aesthetics, even about art, devolved from his investigations of the two "homosexual" men that I have already mentioned. According to Freud's classification, the Wolf Man was a "latent homosexual" who had been shaped by the psychic process that Freud called repression, while Leonardo da Vinci was an "ideal homosexual" organized in so-called sublimation (chapters 7 and 8). Moreover, Johann Joachim Winckelmann in the mid-eighteenth century (chapter 1), John Addington Symonds in the mid-nineteenth century (chapter 4), and Michel Foucault in the mid-twentieth century (chapter 9) must be inevitable and unavoidable thinkers in any reasonably comprehensive review of aesthetics and sexuality. Winckelmann, Symonds, and Foucault wrote from ideological positions that were overtly identified with homoerotic sociability in their respective milieus. And they wrote about homoerotic aesthetic horizons and homosexual artistic possibilities in the past, in the present, and in the future.

Equally important, from the era of Winckelmann to the era of Freud and beyond, the widespread prohibition of nonstandard sexuality (in particular homosexuality) has put considerable pressure not only on conceptions of sexuality, as I suggest in chapters that address Darwinism (chapters 5 and 6). It has also put pressure on conceptions of aesthetics, as I suggest in chapters that address idealism (chapters 1, 2, and 4). It would be going too far to suggest that homoerotic affections and homosexual interactions precipitated a crisis in the very notion of aesthetics or in the very notion of sexuality in the late...

1. Queer Beauty - Sexuality And Aesthetics From Winckelmann To Freud And Beyond

2. Queer Beauty: Sexuality and Aesthetics from Winckelmann to Freud and Beyond (Columbia Themes in Philosophy, Social Criticism, and the Arts)

Book Description 2010. Condition: NEW. 9780231146906 This listing is a new book, a title currently in-print which we order directly and immediately from the publisher. For all enquiries, please contact Herb Tandree Philosophy Books directly - customer service is our primary goal. Seller Inventory # HTANDREE01138825

7. Queer Beauty: Sexuality and Aesthetics from Winckelmann to Freud and Beyond (Columbia Themes in Philosophy, Social Criticism, and the Arts)

8. Queer Beauty: Sexuality and Aesthetics from Winckelmann to Freud and Beyond

Book Description Columbia University Press Aug 2010, 2010. Buch. Condition: Neu. Neuware - The pioneering work of Johann Winckelmann (1717-1768) identified a homoerotic appreciation of male beauty in classical Greek sculpture, a fascination that had endured in Western art since the Greeks. After Winckelmann, however, sometimes the value (even the possibility) of queer beauty in art was denied. Several theorists after Winckelmann, notably the philosopher Immanuel Kant, broke sexual attraction and aesthetic appreciation into separate or dueling domains. In turn, sexual desire and aesthetic pleasure conceived as discrete categories had to be profoundly rethought by later writers. Englisch. Seller Inventory # 9780231146906

10. Queer Beauty Sexuality and Aesthetics from Winckelmann to Freud and Beyond