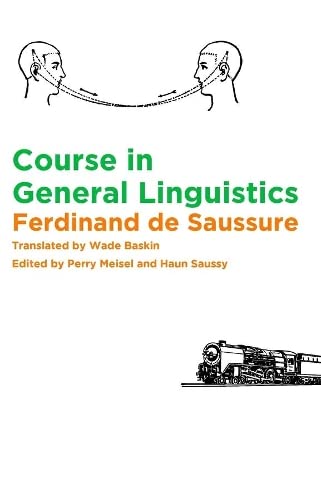 The founder of modern linguistics, Ferdinand de Saussure inaugurated semiology, structuralism, and deconstruction and made possible the work of Jacques Derrida, Roland Barthes, Michel Foucault, and Jacques Lacan, thus enabling the development of French feminism, gender studies, New Historicism, and postcolonialism. Based on Saussure's lectures, Course in General Linguistics (1916) traces the rise and fall of the historical linguistics in which Saussure was trained, the synchronic or structural linguistics with which he replaced it, and the new look of diachronic linguistics that followed this change. Most important, Saussure presents the principles of a new linguistic science that includes the invention of semiology, or the theory of the "signifier," the "signified," and the "sign" that they combine to produce.

This is the first critical edition of Course in General Linguistics to appear in English and restores Wade Baskin's original translation of 1959, in which the terms "signifier" and "signified" are introduced into English in this precise way. Baskin renders Saussure clearly and accessibly, allowing readers to experience his shift of the theory of reference from mimesis to performance and his expansion of poetics to include all media, including the life sciences and environmentalism. An introduction situates Saussure within the history of ideas and describes the history of scholarship that made Course in General Linguistics legendary. New endnotes enlarge Saussure's contexts to include literary criticism, cultural studies, and philosophy.

Ferdinand de Saussure (1857–1913) received his doctorate from the University of Leipzig in 1880 and lectured on ancient and modern languages in Paris until 1891. He then taught Sanskrit and Indo-European languages at the University of Geneva until the end of his life. Among his published works is Memoir on the Primitive System of Vowels in Indo-European Languages, published in 1878 when Saussure was twenty-one.Wade Baskin (1924–1974) was a professor of languages at Southeastern Oklahoma State University and translated many works from French, including books by Jean-Paul Sartre.Perry Meisel is professor of English at New York University. His books include The Myth of the Modern, The Literary Freud, and The Myth of Popular Culture.Haun Saussy is university professor in the Department of Comparative Literature at the University of Chicago. His books include The Problem of a Chinese Aesthetic and Great Walls of Discourse.

Book Description 2011. Condition: NEW. 9780231157278 This listing is a new book, a title currently in-print which we order directly and immediately from the publisher. For all enquiries, please contact Herb Tandree Philosophy Books directly - customer service is our primary goal. Seller Inventory # HTANDREE01168259

Book Description 2011. Paperback. Condition: New. Paperback. The founder of modern linguistics, Ferdinand de Saussure inaugurated semiology, structuralism, and deconstruction and made possible the work of Jacques Derrida, Roland Barthes, Michel Fouc.Shipping may be from multiple locations in the US or from the UK, depending on stock availability. 336 pages. 0.342. Seller Inventory # 9780231157278