Items related to Across the Line of Control: Inside Pakistan-Administered...

Puri, Luv Across the Line of Control: Inside Pakistan-Administered Kashmir (Columbia/Hurst)

Across the Line of Control: Inside Pakistan-Administered Kashmir (Columbia/Hurst) 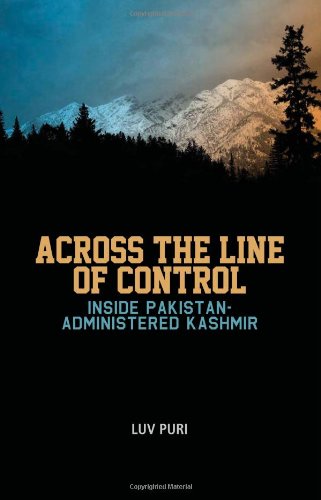 Luv Puri provides sorely-needed analysis of the crucial pre-independence social and political processes that polarized the state as well as the violence that devastated the region during partition. He then follows the effect of these events on Pakistan's Punjab province and the ensuing impact on Pakistan's position toward the Jammu and Kashmir issue. The relationship between Pakistan and PAJK is a significant aspect of Puri's research. He traces the history of migration from Mirpur to Britain and the Mirpuri diaspora's significant support of early militant activities in Jammu and Kashmir in 1989. Based in PAJK, this insurgency promised to free Kashmir from both Indian and Pakistani forces. Puri also discusses the pro-independence struggle's many transformations, from its inception to the present day. An original and revealing volume, Across the Line of Control majorly contributes to literature on the region and the role of PAJK in larger Jammu and Kashmir tensions.

Luv Puri is a Fulbright scholar at New York University and won a European Commission Award for Human Rights and Democracy in 2006. He has been a correspondent with the Hindu and has contributed to various media publications and academic journals. His research interests concern the situation of South Asian Muslims, the conflict in Kashmir, and Pakistan.

A timely work given both contemporary political developments in the Kashmir region and the paucity of literature on Azad Kashmir itself. The volume usefully provides an up-to-date analysis of the region along with material on its Muslim diaspora community. All of these subjects have been relatively under-researched, with more emphasis usually being placed on the Kashmir Valley and its inhabitants. This book therefore seeks to explain the history of Azad Kashmir since 1947 and reveal its relations both to the wider Kashmir dispute and the Pakistan state. This understanding is grounded in an analysis that draws on both documentary evidence and personal testimony.

I was struck by the close parallels between the arbitrary and counterproductive ways in which the treatment of Azad Kashmir by the Pakistan government mirrors Delhi's own treatment of the Indian part of Jammu and Kashmir. Luv Puri nicely depicts, among other things, the contribution of the Mirpur diaspora to the JKLF and the pathos of divided families.

(Ramachandra Guha, author India After Gandhi: The History of the World's Largest Democracy)

Much research and writing on the Pakistan-administered section of Jammu and Kashmir is either hortatory or polemical. Luv Puri's book, Across the Line of Control, is a welcome departure from such accounts. It is carefully researched, cogently argued, and historically sound. Journalists, policy analysts, and scholars interested in the contemporary politics of this ill-understood region will find this work a most useful primer.

Across the Line of Control is an in-depth attempt to go beyond the official narrative and comprehend the complex social, economic, and political realities of the region.

Nuanced [and] evocative... [Luv Puri's] work, based, on rare opportunities (for an Indian national) to travel in the region, traverses its historical experience. [He] patiently takes us through the region's colonial experience; the ugly communal fissures which exploded during partition; the complex politics which have seen new castes and social forces compete for influence there.... Put simply, Puri teaches us that in Jammu and Kashmir, we confront not one unfolding historical crisis but several -- each of which needs careful and patient political engagement.

1. Across the Line of Control: Inside Pakistan-Administered Kashmir (Columbia/Hurst)